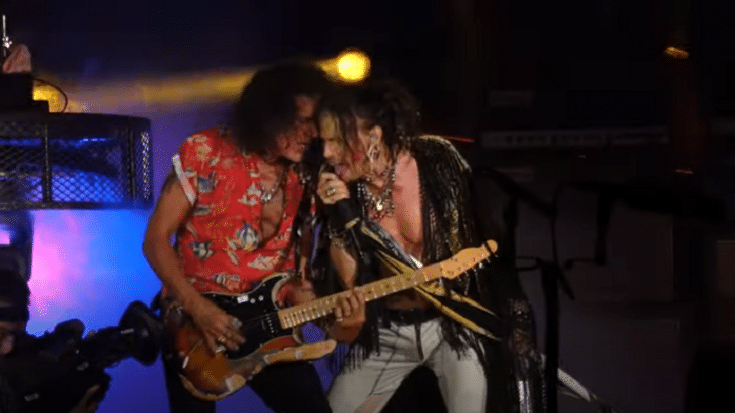 As For Their Touring Plans, He Says “We Wouldn’t Push Our Luck”

Without the coronavirus pandemic, Aerosmith would be busy playing shows left and right – they were slated to continue with their Deuces Are Wild Las Vegas residency on May 20 until June 4. But with almost everything on hold and with the restrictions on mass gatherings, they have no choice but to temporarily leave the live stage. And so in a new interview with Boston radio station WBUR, guitarist Joe Perry said his piece about the outbreak.

He shares, “I would say this is as close to a world war as you could get, in a lot of ways. If you tick off the boxes, it is a world war. Basically, it has shut down the touring business for an indefinite period of time.”

But looking on the brighter side, he says: “As soon as I realized we weren’t gonna be playing for at least months, if not a year, it was almost like I felt like I was on vacation for the first time in 30 years. I didn’t have to think [when I got home], ‘Well, I don’t need to unpack my bags because I’m leaving in a week.’”

While he’s more than eager to perform again, there’s still the matter of safety especially when it comes to the fans. And of course, they would definitely not risk it: “If they somehow wanted to open the shows — and I doubt they would do it — we wouldn’t push our luck. We also feel like we don’t want to be the ones responsible, the ones to say to people, ‘It’s okay to come in. Take your chances. Wear masks. Come in and rock out!'”

He continues, “I don’t see 5,000 people in an arena or theater. It’s too contagious. It doesn’t take much to pass it from one place to another. It would take a lot to get me on a plane to Vegas at this point.”

Aside from a couple of shows at other MGM locations in the US, Aerosmith has also played more than two dozen concerts at the Park Theater in Las Vegas.