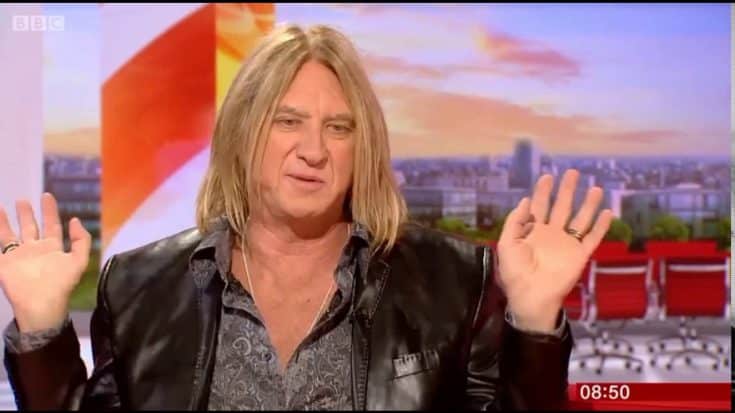 Joe Elliott, lead singer of Def Leppard, recently shared in one of his interviews which Eagles album brought the band their breakthrough moment.

Def Leppard, who returned to the music scene after seven years of break opened their comeback with the studio album Diamond Star Halos, that marks as their twelfth album. Released on May 27, the album featured fifteen original songs and stood out with its nostalgic sound influenced by glam rock and psychedelic sound. The famous bluegrass-country singer Alison Krauss made a guest appearance on the album by performing in two songs.

In a recent conversation, Elliott was asked about Leppard’s latest album, saying it reminded him of the sound of the band’s first two albums. The singer justified it by referring to two songs created by the band’s bassist Rick Savage. He thinks these two songs were old-school Leppard tracks.

He has been comparing Diamond Star Halos with Fleetwood Mac’s Rumours and the Eagles’ Hotel California in terms of their groundbreaking effect on their career. According to the singer, those two albums served as a breakthrough for Fleetwood Mac and the Eagles. Although he also finds their earlier records valuable and significant, he doesn’t think they have such a huge impact on the bands’ careers. Elliott said:

“Yeah, I think the Sav songs. Sav bookends this album. He had the last track, ‘From Here to Eternity’ — that is entirely Sav, and ‘Take What You Want’ was Sav musically, and I did all the lyrics and melodies and stuff. Those two definitely go a little old-school Leppard if you like or just old-school period. And I think the song ‘All We Need,’ which is smack bang in the middle of the album, is about the only thing that sounds like it could have sat on the ‘Hysteria’ album.

“It’s kind of like a hybrid of ‘Animal’ and ‘Hysteria’ itself, but the rest of the stuff, there’s a quantum leap, that I’ve been doing the comparison with ‘Rumours’ and ‘Hotel California.’ They were quantum leaps for Fleetwood Mac and the Eagles, retrospectively. There was nothing wrong with what came before.”

He further explained about the two iconic records:

“I mean, I think the album before ‘Hotel California’ was ‘Their Greatest Hits,’ one of the biggest selling albums of all time. And then they came out with ‘Hotel California,’ and it’s like, ‘Wow!’ And there was nothing wrong with the Jeremy Spencer/Peter Green era of Fleetwood Mac. But then you’ve got the booking of Mick’s thing and one album and then all of a sudden ‘Rumours’ — Boom! It’s a quantum leap.”‘