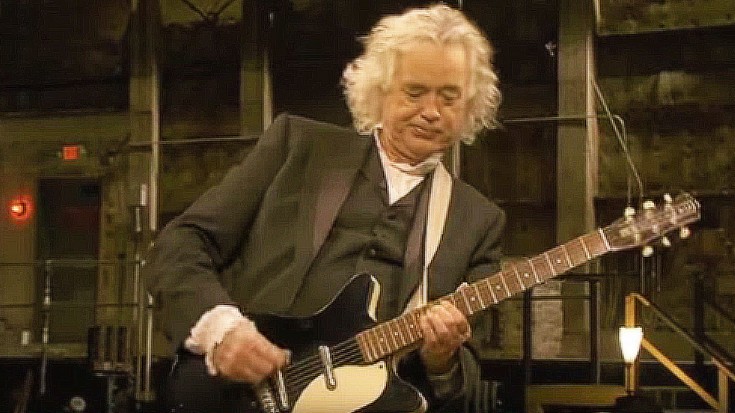 “Where Did ‘Kashmir’ Come From?”

Where small children might ask their parents where babies come from, U2 guitarist The Edge asked Led Zeppelin’s Jimmy Page in the 2009 documentary It Might Get Loud the age old question plaguing guitarists for 4 decades: “Where did “Kashmir” come from? That rhythm and that feel?” Not only does Page answer, he actually peels back the velvet curtain and lets The Edge and White Stripes frontman Jack White into a world that few have ever gotten to see, finally letting them in on the secret to one of the most important songs written in the 20th century: it’s all in the tuning.

Fun Fact: The guitar Jimmy is playing is his Danelectro double cut-away 3021 — the same one he used in his Led Zeppelin days.

For nearly 4 minutes, fans of the legend can see Jimmy Page running through “Kashmir” and making it look as easy as breathing, though fans of Led Zeppelin will recognize the immense skill that goes into Jimmy’s movements along the fretboard and each sweep of his guitar pick. Even the studious Jack White is mesmerized watching one of his idols unlock the secret to “Kashmir,” trying to keep up while U2’s The Edge is so stunned that he can hardly pick up his guitar, much less attempt to mimic Page!

If you’ve ever wondered what makes “Kashmir” so special, check out the footage below – you won’t be disappointed!