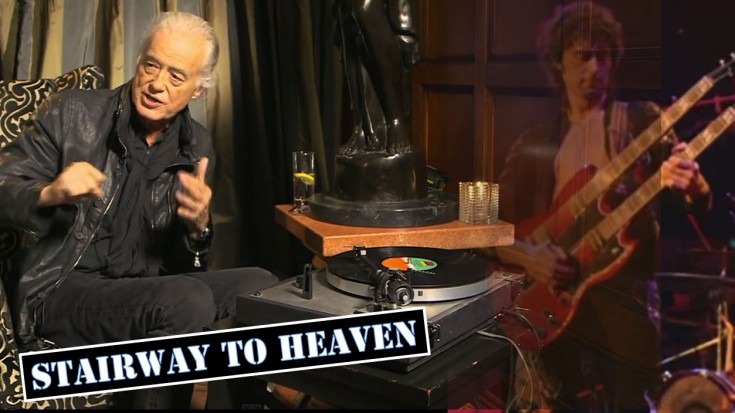 Apparently the most iconic and famous rock song of all time was written about 90% on the SPOT by Robert Plant. In other interviews and footage, it was said that something took over his hand and he just started writing out lyrics. Whoa. That’s freaking nuts…and it’s kind of creepy.  Jimmy Page breaks down the creation of “Stairway to Heaven” in this interview in which he reveals how the song came together.

Here are also some interesting things about Stairway To Heaven:

Although the song’s meaning is up for interpretation, it was written by Robert Plant inspired for his search of spiritual perfection

Never made the charts because it wasn’t even released as a single to the public yet is one of the most played songs on the radio (as requested)….EVER…even though it’s over 8 minutes long

Robert Plant’s hand just started writing lyrics and that’s how most of the song came about. About 90% of the song was written right then and there, as Plant was sitting, leaning against the wall as Page recalls.

Page’s guitar solo was played with a 1958 Fender Telecaster. 3 solos were recorded, and he picked the best solo for the song.

The guitar intro is thought to be inspired from the song “Taurus” by the band Spirit. Led Zeppelin was touring with them at the time.