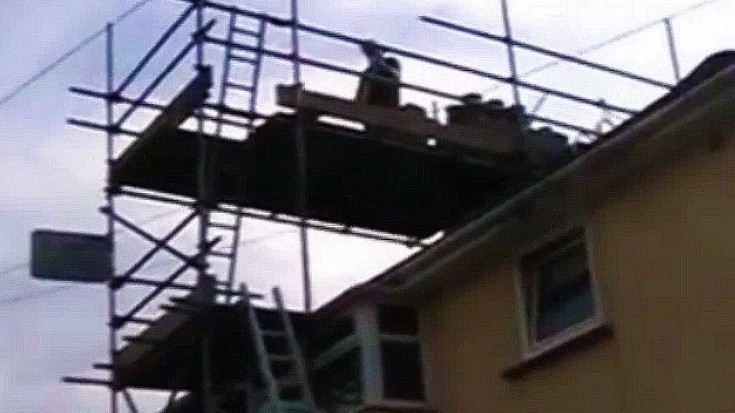 Brings New Meaning To The Term ‘Wake Up Call’

I think we’ve found the first neighborhood that doesn’t mind being woken up by a neighbor tinkering around outside early in the morning! Last week, residents of a small community in South Wales got the wakeup call of a lifetime when 52-year-old Kenn Barnes took to his rooftop with his guitar and amp and using scaffolding as a stage, delivered an almost note for note rendition of Jimi Hendrix’s “Voodoo Child (Slight Return)” at 8am.

Now – normally, this kind of behavior would have given Kenn’s neighbors reason to call the police for a noise disturbance or at the very least, leave a strongly worded note in his mailbox – but instead, Kenn’s neighbors found themselves silent until the final note rang out before erupting into cheers.

The best part of this entire performance? It was all for a bet.

“My mate suggested that I play on the roof decking. I toyed with the idea for a week or so, and so Saturday morning at 7am, I took my guitar amp and guitar up the scaffold and at 8am, I started playing a mix of Hendrix songs – Voodoo Chile and Hey Joe, much to the amusement of the neighbours.”

This is one of the rare occasions where you’ll see a friendly bet go so very right! Check it out in the footage below – like Kenn’s neighbors, you’ll really get a kick out of this one!