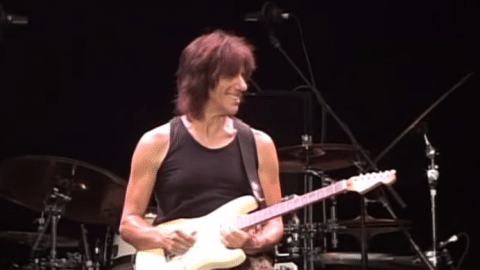 Somewhere At The Fuji Speedway

We all know he’s a guitar wizard, but what he did for “Somewhere Over The Rainbow,” is beyond magical. The crowd was a wave of people swaying to the epic performance. Jeff Beck was touring in Japan during 2006 when he performed the stellar cover at the Fuji Speedway. The original song was written by Yip Harburg in 1939, with a large production.  Beck somehow covers the entire song with just one instrument- yes the guitar even sings. The massive crowd is first silenced by the recognition of the world-famous song, then they  reflexed into an emotional applause.

This was actually a really big deal but you might have missed any word of it. For Japan, this was everything. Huge acts made up the line-up, like: KISS,  Santana, The Doobie Brothers, The Pretenders, Social Distortion, Alice and Chains, and a variety of others. Jeff Beck, of course, was in the line-up that included the biggest acts.

The classic “Somewhere Over The Rainbow,” was a definite crowd favorite.  Beck took the stage in front of thousands of eager Japanese fans. As he started to play the first chords of the song, a hush rolls over the sea of concert-goers. It’s the kind of song that really hits you where it matters- the soul. So imagine, listening to it on the guitar- with no vocals or extra fan fare. Just a living legend and his guitar.

This was a very simple melody for someone on Jeff Beck’s technical caliber. Somehow, he made the song wow the audience just as effectively as his most psychedelic or jazz solos would. Whatever Beck plays turns into an instant masterpiece. Maybe it’s his real down to the bone talent. It could also be his passion that catapults even the simplest songs like, “Somewhere Over The Rainbow,” into beautiful showcases of art.