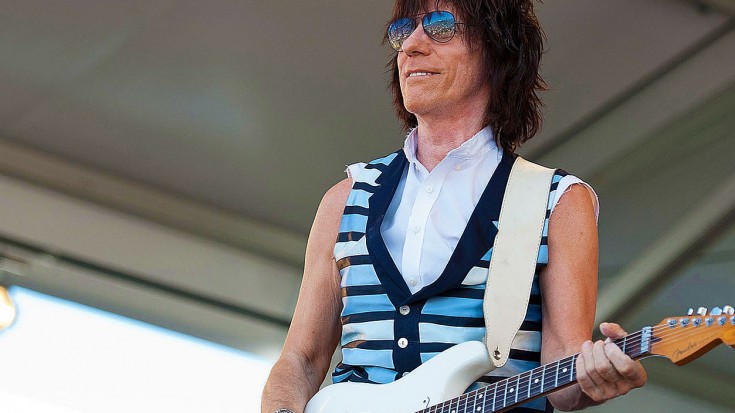 At 72, rock legend and former Yardbird Jeff Beck has seen it all and done it all – and as he looks back on the things he’s seen, he’s pretty worried about the future and the world we’re leaving behind for future generations. It’s not so much the environment Jeff’s concerned about; his new song “Scared For The Children” is a quiet, fearful elegy for the age of the innocents in an era where the dangers aren’t the pollution and threats of communism of Beck’s youth, but things far more insidious and far closer to home.

The highlight of “Scared For The Children” comes in the form of a very pointed nod to late legend Jimi Hendrix and his bluesier side via Jeff whose solo starting at 3:30 remind us of Hendrix’s “Angel” – so much, in fact, that Jeff actually admits being directly inspired by the classic:

Featured on Jeff’s upcoming album Loud Hailer, “Scared For The Children” showcases the vocal talents of singer Rosie Bones, whose gloomy, smoky vocal delivery is the perfect contrast to Beck’s bright, happy guitar lines and according to the guitarist, perfectly interprets his “thematic brief, with regard to modern youth being dumbed down by endless drivel on TV.”

Guys, it’s been a long time since a song has hit us in the feelings quite this way and whether it’s the subject matter or the musicianship, we don’t know; but “Scared For The Children” just might be one of our favorite new songs in recent memory. Check it out in the audio below!