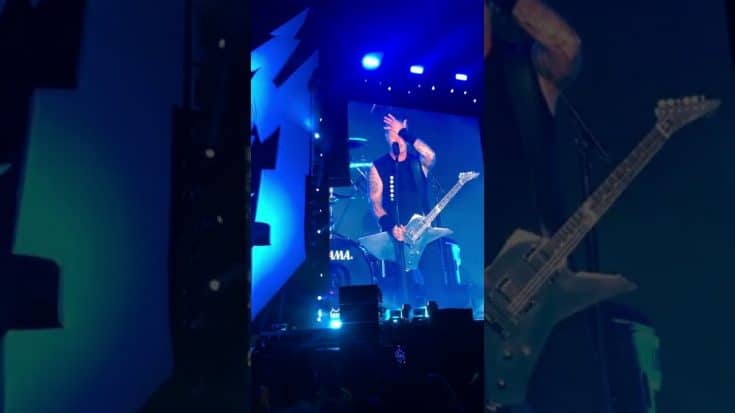 During Metallica’s recent performance in Brazil, the band members walked on stage to hug singer James Hetfield who got emotional talking about his insecurities and how his bandmates helped him to cope up with it.

To the crowd with over 60,000 fans at the Estádio do Mineirão on May 12, Hetfield shared:

“I’ve gotta tell you I wasn’t feeling very good before I came out here.

“[I was] feeling a little bit insecure, like I’m an old guy, can’t play anymore, all this bullshit that I tell myself in my head. So I talked to these guys, and they helped me — as simple as that. They gave me a hug and said, ‘Hey, if you’re struggling on stage, we’ve got your back.’ And I tell you, it means the world to me.”

Then all of Hetfield’s bandmates approached him on stage for a group hug as the crowd cheered. The frontman returned to the mic and said to the audience:

Cues Metallica’s classic song “Sad But True.” You can watch the fan footage below.

In the previous years, Hetfield has been open about his struggles with alcoholism and his own mental health. In 2019, the band had to cancel a scheduled tour in Australia and New Zealand so the singer could return to rehab for the first time in years. While recently, Hetfield admitted he’d been focusing on taking care of himself by:

“asking for what you need, asking if you can help, connecting to the world in different ways. [I have] a lot more knowledge about myself and my relationship with the world.”