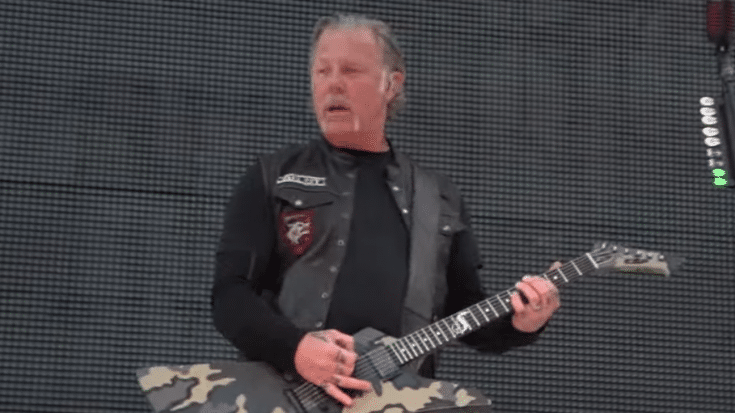 James Hetfield talks about his introduction to music and reveals his two guitar influences in the new promo video of Ernie Ball. The Metallica singer and guitarist is the latest artist who collaborated with the musical instrument company for a signature string.

While showcasing the new strings, Hetfield shared how he started discovering music he likes:

“For me it was a little more raw, kind of music that I liked, more aggressive stuff that was coming out of America then discovering bands like AC/DC and then Judas Priest and then the whole new wave of British heavy metal came out and that was Iron Maiden, then Motorhead, and Black Sabbath for sure was a No. 1 influence for me as a kid.

Hetfield also spoke about his playing style describing it as a “mismatch of a bunch of different stuff,” then he named two guitarists who influenced him:

“I’m kind of a little bit of a barbarian when I play.

“[I’m] always interested in the riff. It was the foundation of the song. Tony Iommi, he’s ruling the song with his riff and everything else joins him. You know, Johnny Ramone, lots of down picking lots of you know, just fast down picking. That helped develop my style. So kind of a combination of punk rock and heavy rock at the time you know, turned into just the down picking style and with melody along with it.”