Jack Black Asks Elton John To Identify His Own Song – The Catch? He Can Only Use This Hilarious Hint 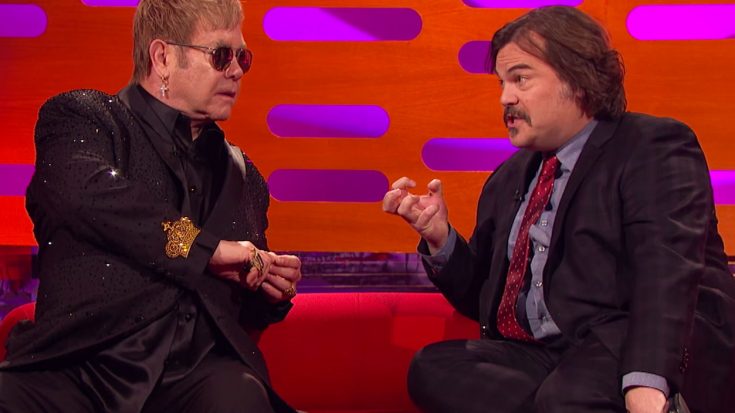 Artists are supposed to know their own work as soon as they see it or hear it – in theory, at least! Sir Elton John was thrown for a loop last year when during his interview on The Graham Norton Show, Kung Fu Panda star Jack Black asked him to identify his own song; not a problem, right?

Surely, even an artist with a catalogue as impressive as Elton’s would be prepared to nail down a song that he wrote, sang, and recorded – but the segment really gets interesting when Black, admittedly terrible at remembering lyrics, turns up his wacky sense of humor and after attempting to describe a particular song by saying “Do you remember the one that you did – it’s just you singing and piano…” dishes out an unintelligible School Of Rock-esque performance of a song that earns him a raised eyebrow and an roar of laughter from the audience.

It takes Elton a second, prompting Jack to “sing” it a second time but before long he has an “A-ha!” moment and exclaims “‘Take Me To The Pilot’!” and erupts into laughter when it finally clicks for Jack. Say what you want about Sir  Elton John, but never let it be said that he doesn’t have a great sense of humor – the guy is hilarious and a great sport!