It’s A Tribute Fit For A ‘King’ When Derek Trucks Teams Up With Slash, Joe Bonamassa For “The Thrill Is Gone” 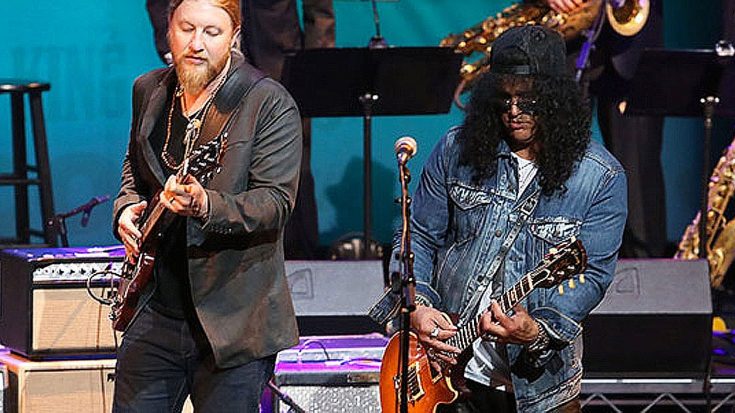 Icon: The Life and Legacy of B.B. King

The music world has taken some pretty major hits over the course of the last year, starting with the May 2015 death of blues legend B.B. King at the age of 89. With only two weeks to go until we celebrate what would have been B.B.’s 91st birthday, the Grammy Foundation and Grammy Museum put together an all-star cast of friends, colleagues and lifelong fans for a once in a lifetime event celebrating the life and career of the 15-time Grammy Award winner called Icon: The Life and Legacy of B.B. King. With a list of performers that included Jimmie Vaughan, Kenny Wayne Shepherd, Joe Bonamassa, Derek Trucks and Slash, fans in attendance saw rock and the blues converge for one hell of a tribute to B.B. in the form of “The Thrill Is Gone” and “When Love Comes To Town”.

Fun Fact: After serving in World War II, Riley B. King, better known as B.B. King, became a disc jockey in Memphis, Tennessee, where he was dubbed “the Beale Street Blues Boy.”

As each guitarist stepped up to the microphone, they let their guitars say what they’ve always wanted to say but could never seem to find the words for in the wake of B.B. King’s death in the form of blistering solo after solo, trading licks in honor of a man whose contributions not just to the blues but to the music world at large remain some of the greatest the world’s ever known. Check out this footage of Slash tearing it up alongside Joe Bonamassa and Derek Trucks – he may be a rock and roller, but the way he fits in among some of the baddest blues guitar players is definitely something you don’t want to miss out on!