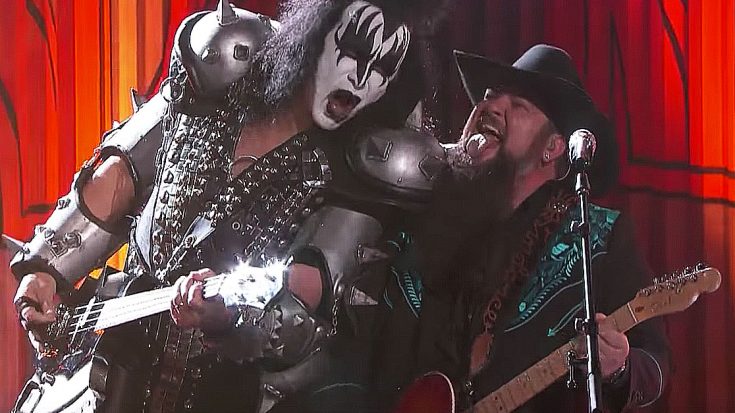 The hottest show on primetime television got even hotter last night when rock legends Kiss made their official debut on The Voice, teaming up with finalist (and winner) Sundance Head of Team Blake. In an explosive 4 minute medley, Kiss emerged from gigantic shipping containers where they flanked Head for an over the top medley of classics like “Detroit Rock City” and “Rock And Roll All Night,” helping the 37-year-old country star claim victory and The Voice’s season 11 crown over fellow country singer Billy Gilman.

Before the big event began, Head was as starstruck at the opportunity to share a stage with Kiss as any reasonable person would be, and it showed:

“It’s crazy, man! I don’t know how to do it really,” Head said. “I was just blown away because these guys are so nice.

You know, they’re rock gods and they’re trying to tell me when I’m supposed to sing and I’m just sitting there amazed that they’re right there onstage with me.”

This isn’t the first time a major figure in the classic rock pantheon helped secure a win for a Voice contestant; in 2014, country star Craig Wayne Boyd became the season 7 winner of The Voice following an all-star performance of “Sweet Home Alabama” with none other than Jacksonville rock legends Lynyrd Skynyrd.

Nothing goes hand in hand quite like classic rock and country music, and this proves it. Congratulations to Sundance Head on his big win!