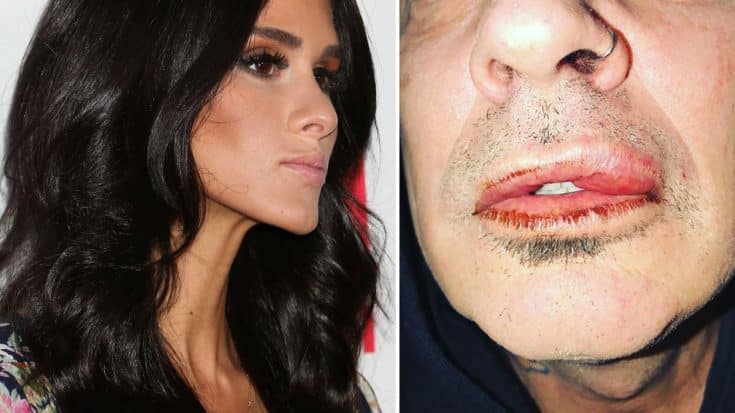 Just hours after news broke of a domestic dispute between ex-Mötley Crüe drummer Tommy Lee and his 21-year-old son Brandon, Lee’s fiancée is weighing in on the matter.

Former Vine star Brittany Furlan, 31, took to social media last night to address the altercation between father and son that left Tommy with bruised and bloodied lips and Brandon under investigation for criminal battery, insisting that “Violence is NEVER the answer.”

Violence is NEVER the answer

Furlan didn’t give any further details as to Monday night’s incident, but according to TMZ who initially broke the story yesterday afternoon, “police confirm with TMZ when they took the initial crime report they were told Brandon and Tommy Lee were arguing over a social media post” – presumably the one Lee made about Brandon’s mother, Pamela Anderson, in regard to her interview with Piers Morgan.

Additionally, Lee took to Twitter to tell his side of the story, saying that he was in bed with Furlan when Brandon burst in late Monday night and knocked him unconscious before taking off prior to the police arriving on the scene.

Hey @TMZ maybe get your facts straight before you go reporting bullshit. My fiancé and I were in bed when my son busted into the room and assaulted me. I asked him to leave the house and he knocked me unconscious. He ran away from the police. THAT’S the truth.

Lee’s post generated a thread in which Furlan weighed in once more, elaborating on her own statement that “violence is never the answer,” hinting that the problem could have been solved if Tommy and Brandon had talked it out instead of waiting until things went to the point of no return:

Violence is NEVER the answer. No matter the situation. People need to learn to talk things out, not throw punches. It’s not necessary and doesn’t solve anything

As we reported yesterday, Tommy Lee and son Brandon were involved in a domestic altercation late Monday night that ended with Brandon punching his father. Lee initially posted to Instagram, saying “My heart is broken. You can give your kids everything they could ever want in their entire lives and they can still turn against you” before ending the post with a sarcastic “Good job Brandon! Great son! @brandonthomaslee” and tagging Brandon’s personal Instagram account.

The photo, showing Lee’s bruised and bloodied lips, has since been pulled from Instagram.

As of the time this post was written it’s been reported that Tommy Lee is, in fact, pressing charges against Brandon, though  TMZ reports that he “absolutely acted in self-defense”.

This is a developing story; stay tuned to Society of Rock for more updates and details as they become available.