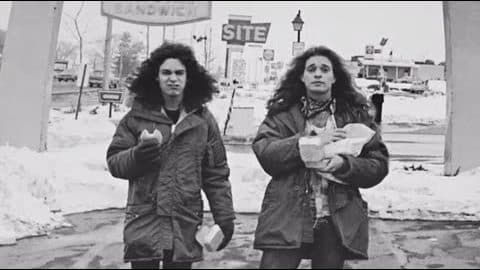 The iconic photo of original Van Halen members, the late Eddie Van Halen and David Lee Roth standing under the McDonald’s arches on a winter day and holding burgers has been installed in the same place where it was taken.

The well-known concert photographer, Richard Upper, took the picture. Upper recalled the day when he was sent to join the band in a limousine for their debut album. As they drive down the road, they passed by a brand-new McDonald’s branch that was on its opening day. Upper recalled the story:

“We were driving from KSHE down Watson, and we saw the McDonald’s sign. We’re already hungry, and they said, ‘Let’s go, guys.’ So, we did.

“We got our meals, and we were walking back to the limousine. I looked up at the sign and said, ‘Eddie, we can’t leave without taking a shot of this with you guys.’ So, he’s rifling through his bag trying to eat ‘cause he’s really hungry, and he and David get perfectly right in the middle, under the sign, and I take a bunch of pictures. This was the best one.”

Nolan Ruiz, the current owner of the Crestwood franchise National restaurant No. 71 confirmed it was the first McDonald’s in St. Louis, Missouri and it opened in August 1958. However, he said that the original building was replaced soon after Van Halen’s visit and it was recently knocked down to make way for a state-of-the-art establishment, with the famous picture of the two on display.