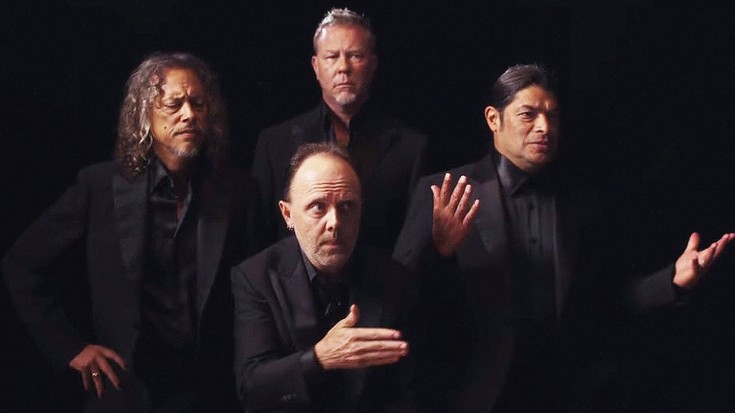 A lighter side to the heavy metal rockers

Metallica showed off a light-hearted side of themselves in a recent ad-campaign for Brioni, an Italian luxury menswear company. The four rockers suited up and shot a series of comedy sketches with Justin O’Shea who is the creative director for Brioni. The photo/video shoot took place last month in San Francisco. Lars Ulrich had previously worked with O’Shea in an ad-campaign for his former company MyTheresa.com.

The sketches are interactions between Metallica and the shoot director. They include the director being oblivious to who Metallica is, showing Kirk Hammett some sexier guitar moves, criticizing Robert Trujillo’s head-banging style, asking James Hetfield to replace his guitar with a saxophone, and asking Lars to use a smaller set of sticks. In addition to the videos, Metallica were photographed by Zackery Michael. One of the photos features the band posing in a similar fashion to Queen’s “Bohemian Rhapsody” music video.

The videos are a great example of the lighter-side that these heavy metal rockers possess. You can check out the full playlist of the videos below!