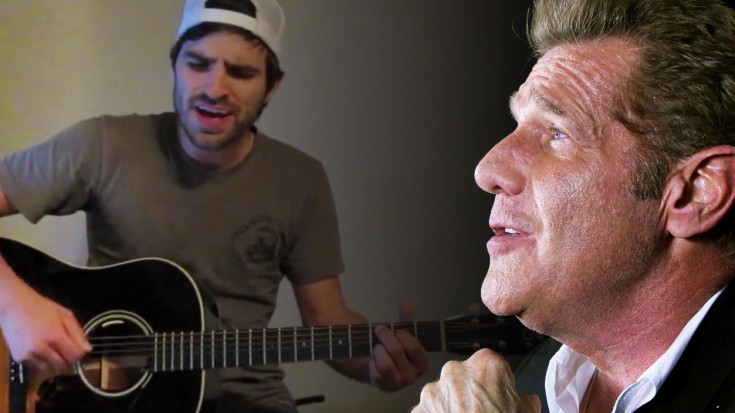 Meet Mitch Rossell, a talented guitarist and vocalist that wanted to pay tribute to one of his favorite bands, the Eagles, with this stunning rendition of Glenn’s “Take It Easy.” Although no one can sing this song like Frey, we thought that he did a great job of carrying on the sweet melody, but also making it own which is what great artists do with covers.

Interesting Quote: “America’s first image of our band with the vistas of the Southwest and the beginnings of what became Country-Rock.” – Frey

First written by Jackson Browne, unfinished and frustrated Jackson turned to his upstairs neighbor in need of a song for his band, the Eagles, the one and only Glenn Frey. As Glenn polished the lyrics and birthed the song’s phrase “It’s a girl, my lord, in a flatbed Ford, slowing down to take a look at me.”

Browne, in turn, released the song’s contents to Frey, after which the Eagle recorded and released it with the guys as their first single and the first track on their debut album, Eagles. The song eventually reached #12 on the Billboard Hot 100 and was ranked on the  The Rock and Roll Hall of Fame’s 500 Songs that Shaped Rock and Roll.

Well I’m a-runnin’ down the road try’n to loosen my load
I’ve got seven women on my mind
Four that want to own me, two that want to stone me
One says she’s a friend of mine
Take it easy, take it easy
Don’t let the sound of your own wheels drive you crazy
Lighten up while you still can
Don’t even try to understand
Just find a place to make your stand, and take it easy

Well, I’m a standin’ on a corner in Winslow, Arizona
Such a fine sight to see
It’s a girl, my Lord, in a flat-bed Ford
Slowin’ down to take a look at me
Come on, baby, don’t say maybe
I gotta know if your sweet love is gonna save me
We may lose and we may win, though we will never be here again
So open up I’m climbin’ in, so take it easy

Well, I’m a runnin’ down the road tryin’ to loosen my load
Got a world of trouble on my mind
Lookin’ for a lover who won’t blow my cover, she’s so hard to find
Take it easy, take it easy
Don’t let the sound of your own wheels make you crazy
Come on baby, don’t say maybe
I gotta know if your sweet love is gonna save me

Oh, we got it easy
We outghta take it easy