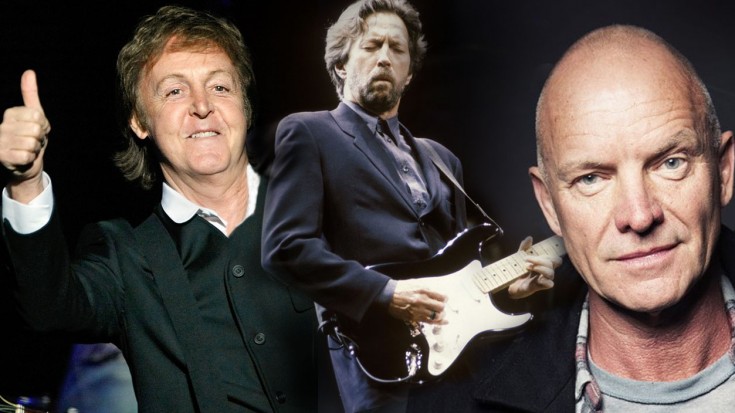 Arranged and produced by George Martin (the fifth Beatle), Music For Montserrat was held on Sept 15, ’97 at the Royal Albert Hall.

After a major volcanic eruption earlier that year left the island devastated, Martin arranged for a stellar group of musicians to come together to raise money for the Caribbean island of Montserrat.

All proceeds from the show that evening including the DVD and CD were used for immediate relief and also went to help fund a new cultural center in Montserrat.

The concert starred musicians such as Phil Collins, Ray Cooper, Carl Perkins, Jimmy Buffett, Mark Knopfler, Sting, Elton John, Eric Clapton, Paul McCartney, Midge Ure, and many more, all of whom had once recorded at the island’s famous AIR Studios.

McCartney really knows what he’s doing. While he acknowledges his past without living in it, he records with new artists and has been able to reinvent himself while staying true to who he has always been. He’s managed to grow old gracefully while remaining relevant to music today.

Hey Jude, don’t be afraid
You were made to go out and get her
The minute you let her under your skin
Then you begin to make it better

Hey Jude, don’t let me down
You have found her, now go and get her
Remember to let her into your heart
Then you can start to make it better