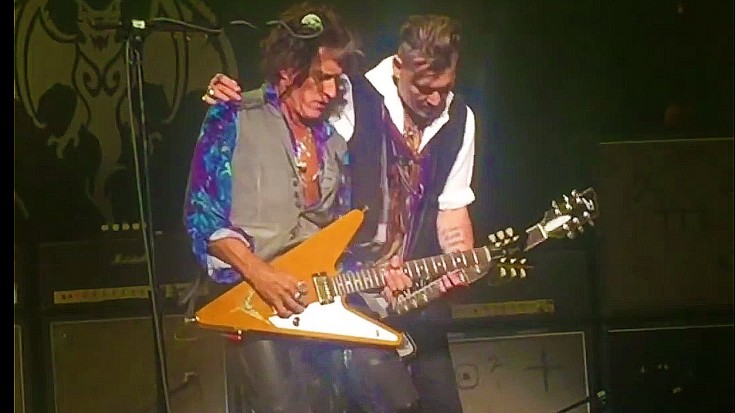 He’s baaaack! That’s right, folks; after missing two weeks of Hollywood Vampires shows due to complications from dehydration and exhaustion, Aerosmith guitarist Joe Perry made his triumphant return to the stage Friday night, just in time to finish up the Hollywood Vampires’ final four dates on their summer tour. With only 3 dates left to go before the tour wraps, Joe’s highly publicized return came to the delight of fans who were fiercely worried about the 65-year-old guitarist’s condition following his July 10th collapse backstage at the band’s Coney Island show; but while fans missed him, no one missed him more than his fellow Vampires!

Fun Fact: Of Perry’s near-600 guitars, his favorite is his “Billie” Gibson Lucille. A Gibson Custom Shop Lucille in white, it is also adorned with a portrait of Joe’s wife, Billie.

Thanks to a fan who caught the magic of Friday night’s show in California, the video you’re about to see features the boys jamming a particularly meaningful take on The Beatles’ “Come Together” and when all eyes weren’t on singer Alice Cooper, the focus was on Joe Perry and his bandmate Johnny Depp who refused to leave his friend’s side for the duration of the song. Rocking an inverted Gibson Flying V, Joe’s never looked happier as he trades licks with Johnny during a guitar solo and re-takes his rightful place as lead guitarist with a blistering solo at the song’s outro. We’ve never been happier to see anyone hit the stage after such an eye opening health scare, and we wish Joe the best of health and happiness as he prepares to kick off the rest of the tour with a bang!