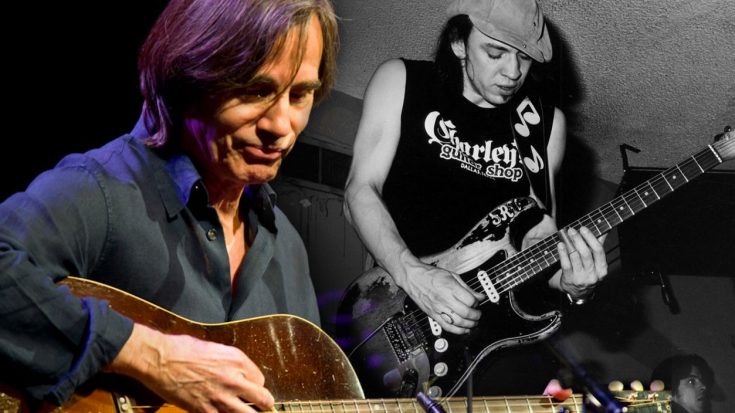 While we knew and loved Stevie Ray Vaughan for his contribution to the blues, the late Texas blues legend was never afraid of a challenge, even if it meant being a little out of his wheelhouse. In fact, in the case of his collaborations with other artists, that’s where Stevie shone brightest; whether it was jamming with Jackson Browne until the wee hours of the morning or recording a dance album with David Bowie, there’s a tremendous amount to be said for Stevie Ray Vaughan’s versatility and spirit of adventure!

In 1989, his versatility came in handy when he appeared onstage with singer-songwriter Jackson Browne for a few moments to perform “Stay”, written in 1960 by doo-wop group Maurice Williams and the Zodiacs and featured on Browne’s 1977 album Running On Empty with an extended playout.

Fun Fact: Stevie and Jackson met at the 1982 Montreux Jazz Festival, after which they jammed into the wee hours of the morning. Jackson offered him the use of his Downtown studio, to record a demo that hopefully would land Double Trouble a record contract.

While you don’t actually hear Stevie until about 8:32, when you do finally hear him it’s absolutely worth it; jumping in on the extended playout of “Stay,” he delivers a pretty interesting solo that we’re positive he improvised in the heat of the moment, much to the delight of the crowd who likely didn’t expect to get Jackson and Stevie on the same night, on the same stage!