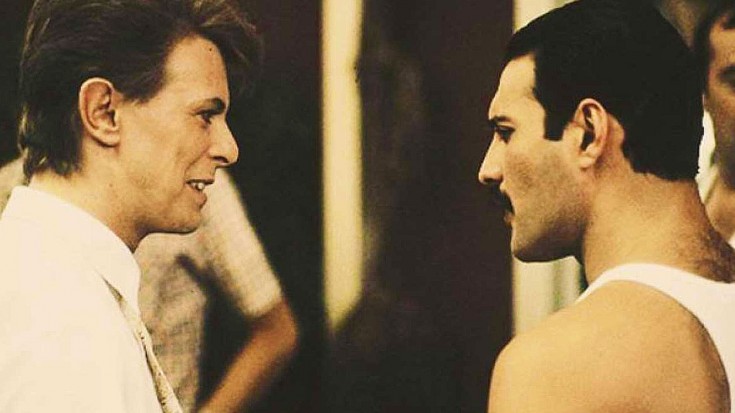 As the world mourns the loss of visionary music legend David Bowie, another visionary music legend comes to mind and with him, one of the greatest collaborations in rock history: Queen’s Freddie Mercury and the incredible chart topper “Under Pressure”. Recorded in 1981 and featured on Queen’s 1982 album Hot Space, “Under Pressure” featured the talents of both Freddie and David Bowie, who according to Queen guitarist Brian May was an integral part of the song’s birth as he lyrically took control of the recording sessions. More importantly, however, are the vocal performances delivered by Freddie and Bowie – as heard in this exclusive audio these men were an absolute force to be reckoned with vocally, second to none as they traded licks in the studio that day; moments of strength and power interwoven among moments of quiet vulnerability and something a little desperate at times are what make up the powerhouse team Bowie and Mercury made for “Under Pressure”.

Brian May Looks Back On Writing “Under Pressure”

“The procedure was each of us went into the vocal booth consecutively, without listening to each other, and, listening to the track, vocalised the first things that came into our heads, including any words which came to mind, working with the existing chord structure.”

Sadly, we’d never get to see them take the stage together – Queen ceased touring in 1986 and Freddie’s death came just a few short years later. This exclusive audio from the original “Under Pressure” recording session is absolutely fantastic in that it’s two of the greatest entertainers the world has ever seen as you’ve never heard them before – raw and at their most vulnerable, creating something meant to last several lifetimes.

It’s the terror of knowing
What this world is about
Watching some good friends
Screaming let me out!
Pray tomorrow takes me higher
Pressure on people
People on streets

It’s the terror of knowing
What this world is about
Watching some good friends
Screaming let me out!
Pray tomorrow takes me higher higher higher
Pressure on people
People on streets

Turned away from it all
Like a blind man
Sat on a fence but it don’t work
Keep coming up with love
But it’s so slashed and torn
Why why why?
Love love love love