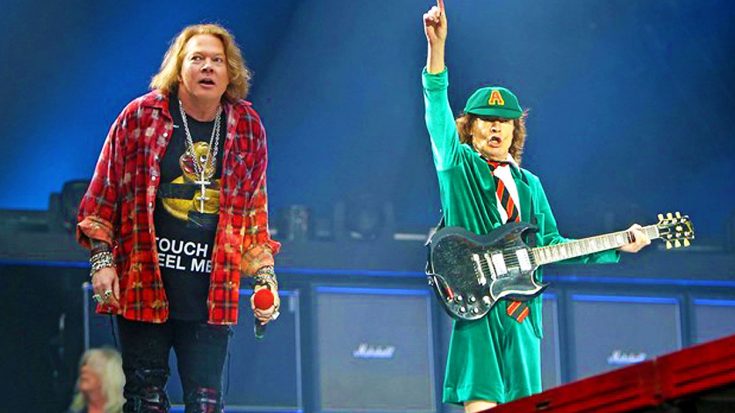 When Brian Johnson was forced to leave AC/DC last year due to complications with his hearing, Guns N’ Roses frontman Axl Rose stepped up and filled in in his place. Axl’s amazing job as a backup led to great reviews, and forever intertwined the two bands!

In return for filling in for AC/DC, Angus Young repaid GNR this past week by making a guest appearance at the band’s performance in Sydney, Australia. Angus joined the band out on stage and played guitar on two Guns N’ Roses tunes! The two played a pair of AC/DC songs! They kicked it off with “Whole Lotta Rosie,” before Angus then led the band into the song “Riff Raff.” Both Angus and GNR sounded amazing, and looked like they were having the time of their lives! Axl even cracked a joke at the beginning that Angus wasn’t in his iconic school uniform, but Axl had a GNR letterman jacket on!

This wasn’t the first time Angus joined GNR on stage. Last year, Angus joined the band on stage at their Coachella performance.

Fun Fact: This song is about a very large woman lead singer Bon Scott had relations with early in the band’s career. In a 1976 interview with the band for Sounds magazine, their guitarist Malcolm Young prodded Scott to tell the story about “the fat one.” Scott explained that backstage at a show in Australia, a rotund woman they called “Big Bertha” came forward when he asked, “Who wants it?” Too frightened to refuse, he did the deed with Bertha, who then called to her friend, “that’s the 37th this month,” and produced a black book where she recorded her conquests. Scott turned the incident into a song, this time naming the woman “Rosie.”

It’s great to see these two bands keeping in touch and remaining proactive with each other. Hopefully we can see more of this in the future! Check out the video down below!