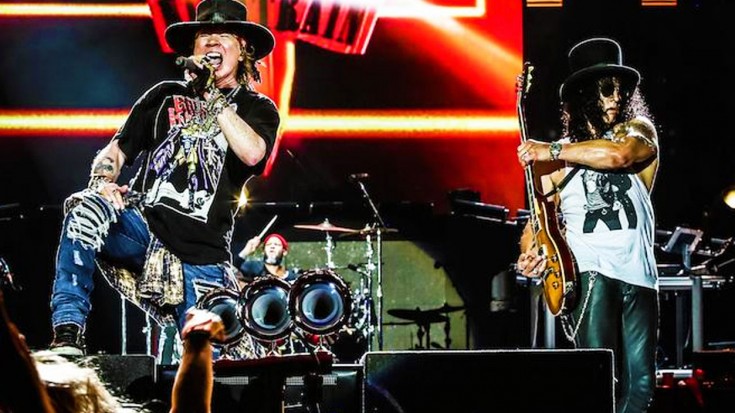 “Catcher In The Rye” Comes To Foxboro, Mass

Well into their highly anticipated Not In This Lifetime Tour, LA rock legends Guns N’ Roses are pulling out all the stops to make this tour one to remember. The past few dates on the tour have included cameos from former drummer Steven Adler and surprising tour openers in the form of Chris Stapleton and rocker-turned-DJ Skrillex, but now Guns N’ Roses are making a few key changes to their already impressive setlist – changes that successfully bring together old Guns N’ Roses with the Chinese Democracy era Guns N’ Roses for the very first time. Fans at the Foxboro, Massachusetts show were treated to a rendition of Chinese Democracy’s “Catcher In The Rye,” making it the first time the Appetite For Destruction era lineup consisting of Duff McKagan and Slash have ever performed the song and as if anyone was really surprised, these guys absolutely nailed it!

Slash easily navigates the uptempo ballad as if he’d written it himself, blasting through solo after solo and totally secure in the knowledge that his bandmates won’t fail him, the kind of confidence that only comes from working with the same people for a lifetime. No word yet as to whether we’ll hear more Chinese Democracy tracks on this tour (we’re holding out for “Street Of Dreams”), but if you were in any way worried that the blend of old and new Guns N’ Roses somehow wouldn’t work, prepare to be blown away!