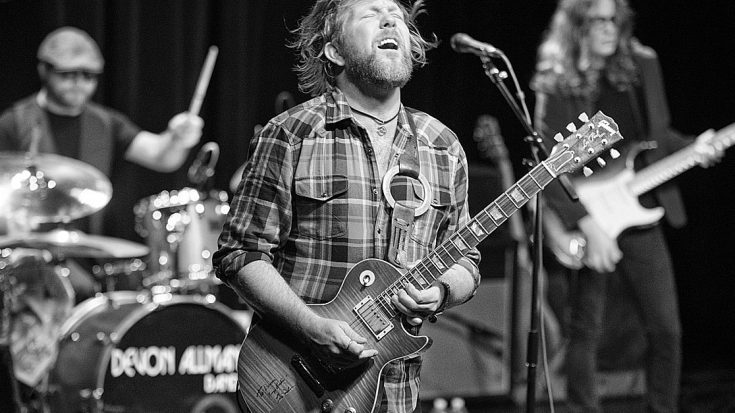 The Son Of The ‘Midnight Rider’ Rides On

One look at Devon Allman and it can be difficult to ascertain which Allman brother he belongs to; he’s got Duane’s face and mannerisms and much like his famous late uncle, Devon tears up a Gibson Les Paul like you wouldn’t believe. It’s not until Devon opens his mouth that you realize that it’s actually Gregg’s son you’re looking at, and when he launches into his father’s 1970 masterpiece “Midnight Rider” it’s clear that when it comes to talent and the Allman family, you don’t learn it – you’re born with it.

44 years old and an accomplished musician in his own right, Devon’s made a career out of following in his old man’s footsteps, crafting timeless blues soaked jams that bring the Allman family legacy to a brand new generation excited to see what magic Devon’s able to spin as the son and nephew to two of the greatest musicians in history.

Fun Fact: Despite trying to musically distance himself from his father, who he didn’t meet until he was well into his teens, Devon realized that his gift was inherited and that it made no sense to try to fight it.

Occasionally, though, you’ll see Devon dust off an Allman Brothers Band classic like “Midnight Rider” and absolutely blow the doors off of any venue you put him in, combining that massive voice reminiscent of his dad’s with his uncle’s almost otherworldly mastery of the guitar for one hell of a takeoff on an old favorite. Gregg Allman has always called “Midnight Rider” the greatest thing he’s ever done, but watching this performance featuring Devon doing his family legacy proud is enough to convince us that “Midnight Rider” just might be the second greatest thing he’s ever done.