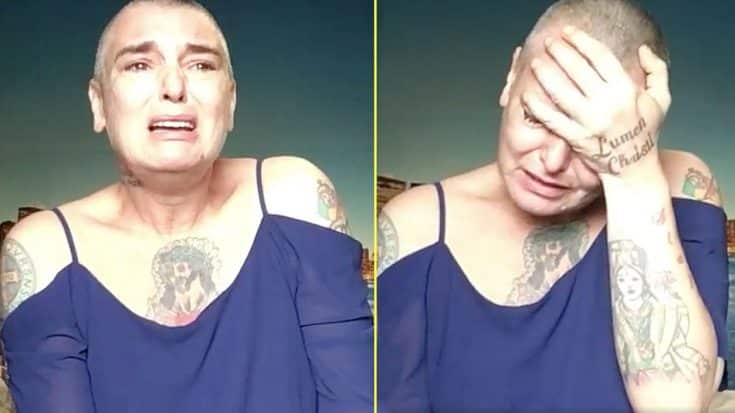 Fans Worried About Singer In The Wake Lengthy Video

Grammy Award winning singer Sinead O’Connor has left millions of people talking. Earlier this month, O’Connor released a 12 minute video to Facebook that showcased the 50 year old singer-songwriter in a New Jersey motel room tearfully lamenting her struggles with mental illness and a family that she says has abandoned her as a result, leaving fans to worry for her safety and well being.

The video has since gone viral, amassing over 1 million views and several thousand shares and while it’s a little uncomfortable to watch at moments, that’s exactly point O’Connor wanted to make: that mental illness isn’t always nice or convenient, and that where she is profoundly lucky to have the resources she needs to get help to treat her mental illness, there are millions of others who do not:

“I hope that this video is somehow helpful.

O’Connor’s video drew concern from friend Annie Lennox, who took to Facebook earlier today to express her worry and wondered if there were any “close friends or family who could be with her to give her some loving support?”

Despite the worry caused by O’Connor’s video, a post to her official Facebook page assured fans and friends that she is, in fact, alright and receiving the care she needs. Our hearts go out to her and the millions like her suffering from one form of mental illness or another, and as always we want to remind you: if you need help, please don’t ever be afraid to reach out, even if it’s just to your friends here at Society of Rock.

You rock. Each and every one of you, and you matter. If you or someone you know is struggling to make it to the next sunrise, you’re not alone. Please, please, please reach out and get help – it can, does, and will get better.