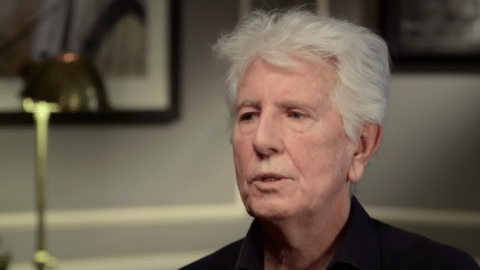 It Was A Tough Time For Him

In a new interview on Apple Music’s Zane Lowe Show, Graham Nash discussed the “emotionally destroying” experience he endured in the recording studio which resulted in tears. At the time, Crosby, Stills, Nash & Young were busy with their 1970 album Déjà Vu – their first as a quartet with Neil Young. It was when Nash realized it wasn’t easy working alongside Young.

Nash noted, “We didn’t become a band like Crosby, Stills & Nash was. We became something else, and it was painful.”

Nash would finish a mix which everyone else in the studio loved but when he’d return the following day, he’d find out it was “completely redone”.

It got to a point where he looked over at his bandmates and “said, ‘Look, we’re blowing this. We’re just blowing this.’ And I started to cry.”

“And that’s the only time that I’ve ever cried when I was making music. That time was very emotionally distressing for me, because I want the song done,” he added. “I won’t quit until it’s done, but it was emotionally destroying.”

Déjà Vu was a landmark record. It topped the US Billboard 200 and also charted in other countries. It was eventually certified 7x platinum by the RIAA. Listen to the rest of the interview below.