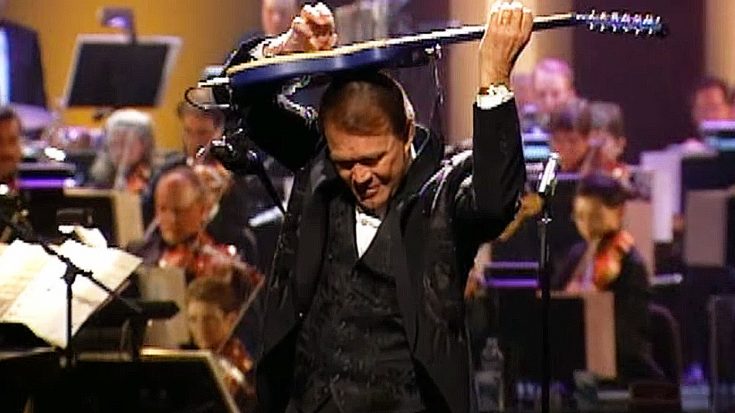 One of the most fiercely sought after session musicians of the 20th century, Glen Campbell’s legacy far exceeds that of his contributions to the worlds of country and pop music. A member of the famed Wrecking Crew before branching off and embarking on a solo career that spawned over 45 million records sold, 12 RIAA Gold albums, four Platinum albums and one Double-platinum album, Glen’s prowess as a guitar player is what stands out to us the most against the glowing backdrop of his career – a powerful blend of technique, a serious ear for music and as you’re about to see, a little theatricality set Glen apart from his contemporaries and earned the respect of fans and critics alike.

One of our favorite moments from Glen’s career comes from his performance of the “William Tell Overture”; he kicks things off with a heartwarming story about being a little boy growing up in Arkansas and watching The Lone Ranger, hoping to one day be able to play the show’s “William Tell Overture” theme on his own guitar and not knowing then that his life would take him on an incredible journey and see his gifts celebrated the world over.

The party really starts when Glen and the orchestra behind him launch into the song, Glen ultimately stealing the show towards the end of the performance by crushing the rest of the song while playing his 12 string guitar over his head! Pretty cool, right? An absolute showman and an insanely gifted musician, Glen absolutely schooled us in the art of shredding with this performance, and we wouldn’t have it any other way.