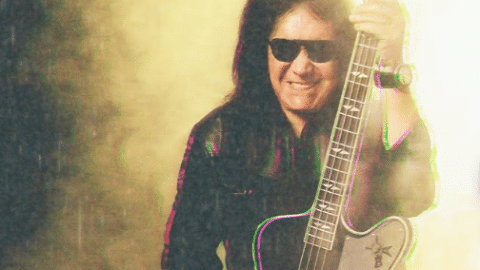 The Gene Simmons G² Thunderbird Bass is described as designed to meet the musical needs of modern bassists. It’s just one of the multiple electric guitar and bass collections across Gibson Brands including Gibson, Epiphone, and Kramer. According to them, there will be more signature and core guitars to come from the Gibson Bass lineup.

Simmons said about the partnership:

“Gibson is an outstanding company and has earned its place as a leading guitar brand with fans around the world.

“The new G² Thunderbird basses are all handmade in the USA, with a sound that is off the charts. The design is so beautiful and collectible, they are simply works of art.”

“We are excited to launch the first of many projects together with Gene Simmons!

“The Gibson Gene Simmons G² Thunderbird Bass guitar has been more than a year in the making. It looks and sounds EPIC, and it is unmistakably Gene. Working with him is such a privilege for all of us at Gibson; he is deeply involved in every aspect of developing the guitars and planning our launch. A legendary musician who has touched the lives of generations of music fans, Gene is also a creative and successful entrepreneur. This is the first of many ways in which the G² partnership will be paying tribute to Gene, his iconic status, and continue to inspire new generations of Gibson and Gene Simmons fans to play and create music.”

The launch of the new product comes with a commercial where Simmons introduced himself as Dr. D. D’mone from the Institute for Bass Guitar Solutions and help a bullied guy become the cool guy with the Gene Simmons G² Thunderbird Bass as it is “the vehicle for maximum self-confidence.”

Watch the advertisement below. The Gene Simmons G² Thunderbird Bass guitar is now available worldwide at authorized Gibson dealers and via www.gibson.com.