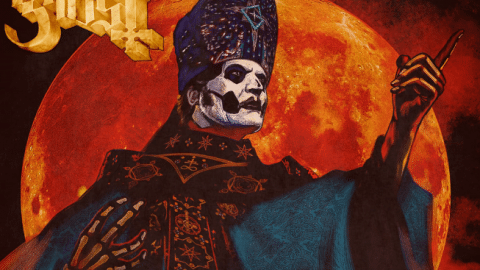 Ghost is back, just in time for Halloween! They dropped a new chilling single titled “Hunter’s Moon”, which is part of the soundtrack to the upcoming horror film Halloween Kills. It’s an eerie song, and of course it’s accompanied by a creepy music video. Otherwise, what’s the point right?

“Hunter’s Moon” is set for release as a 7-inch vinyl single on January 21, 2022 via Lorna Vista Recordings. The B-side will be “Halloween Kills (Main Title)” theme by legendary composer John Carpenter.

Ryan Turek, Vice President of Feature Film Development at Blumhouse Productions, which is one of the companies producing the aforementioned movie, saw Ghost at their sold-out show at the LA Forum on November 16, 2018. Turek met frontman Tobias Forge and introduced the latter to the movie’s co-writer and director David Gordon Green. After which, Green arranged to have Ghost’s song appear on the soundtrack.

In October 2020, Forge was interviewed by Sweden Rock Magazine where he talked about their next album.

“It takes about six weeks to record and then two to three weeks for mixing and mastering,” he said. “So sometime in March the record should be finished, but it won’t be released until after the summer.”

“We will not release an album until we know we are going on tour,” he added. “It will coincide with a tour start.”