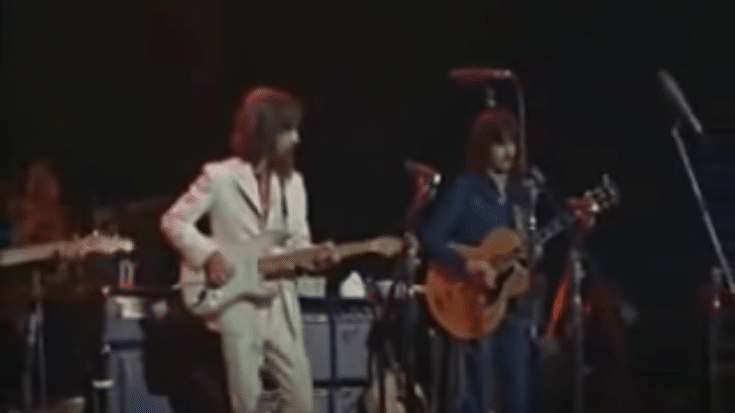 George Harrison and Eric Clapton weren’t just peers, they were also close friends and in fact, Harrison invited Clapton to The Beatles recording sessions. They’re both prolific songwriters and excellent guitar players. And so during the Concert for Bangladesh which Harrison organized with Indian sitar player Ravi Shankar, Clapton was invited as one of the performers.

Harrison explained, “The Concert For Bangladesh happened because of my relationship with Ravi… I said, “If you want me to be involved, I think I’d better be really involved,” so I started recruiting all these people.”

On August 1, 1971 at the Madison Square Garden in New York City, Clapton joined Harrison on stage for a stunning take on the latter’s musical masterpiece While My Guitar Gently Weeps.

It became the highlight of the entire event.

At the time, Clapton was still struggling with his heroin addiction and in the video, he was clearly not in top form. Still, it’s a spectacular performance with a star-studded lineup. Ringo Starr was also present at the concert. Harrison invited former bandmates John Lennon and Paul McCartney but both of them declined. Lennon initially agreed to play at the show but after an argument with Yoko Ono, he backed out.