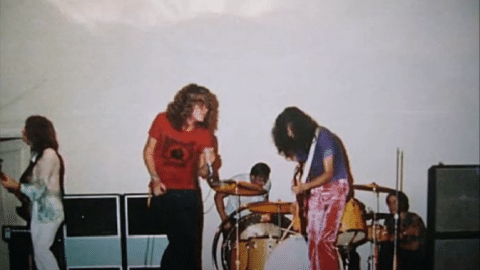 He Said “They Literally Brought The House Down”

Rush’s Geddy Lee has always been vocal about his admiration for Led Zeppelin. Before he became a rock legend himself, he was already a huge fan of the ’70s titans. He even previously shared the first time he met Robert Plant and Jimmy Page.

And in a new interview with Classic Rock magazine, Lee shared a fond memory of seeing the band play for the first time. It was at a gig at The Rock Pile in Toronto on August 18, 1969.

“They were doing two shows. We were at the first show,” he recalled. “I went with [original Rush drummer] John Rutsey and Alex [Lifeson]. It was general admission.”

“We lined up for hours. We got in and we sat in the second row. And I swear they didn’t walk out on stage – they floated out,” he continued. “They literally brought the house down, because by the end of the night there was plaster falling from the ceiling.”

Led Zeppelin had a huge influence on Lee and his music. He described them as having “a sound that constantly surprised”. He also admitted that he loved Plant’s Tolkien-inspired lyrics and the “combination of the way Jimmy’s acoustic guitar is used and the presence of that blues background.”

Lee revealed that they tried playing Led Zeppelin in their early years but they couldn’t pull it off.