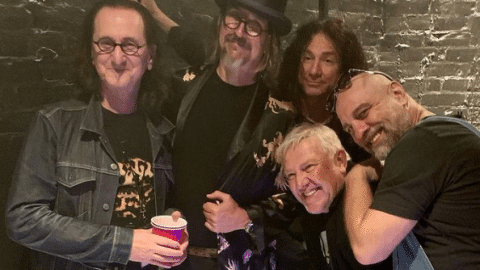 Rush surviving members Geddy Lee and Alex Lifeson were present at the recent A Farewell to Kings tribute show by Primus on May 13 at Toronto’s Massey Hall. The special tour was first announced by Primus prior to the pandemic and now it finally happened.

Lee shared a backstage photo of himself with Lifeson and Primus on Instagram with the caption:

“On Friday night we had the joyful experience of reuniting with our grand pals from Primus… Les, Ler, Herb and their gang… We sat side stage as they immaculately worked through a cool selection of classic Primus tunes which brought back fond memories of our touring together back in the early 90’s and then we were treated to the weird and wonderful experience of watching them perform our music: A Farewell to Kings in it’s entirety.

“Totally nailed it! They did us proud and we thank them deeply for the tribute and the lasting friendship.” In addition, the backstage photo was accompanied by a setlist and doodle drawing shared as well. Plus Primus posted their own backstage photo, as can be seen below.”

In a recent interview, Les Claypool shared how A Farewell to Kings became the chosen album for the tour, he said:

A Farewell to Kings was Rush’s fifth studio album that reached No. 33 on the Billboard 200 album chart. It included some of the band’s first hits such as “Closer to the Heart,” “Cinderella Man,” and “Cygnus X-1.”

Primus are currently still in the middle of their tour with dates in Montreal, Quebec City, Albany, Port Chester, Montclair and Huntington all scheduled this week.