Freddie Mercury Shares What Made Queen Stay Together 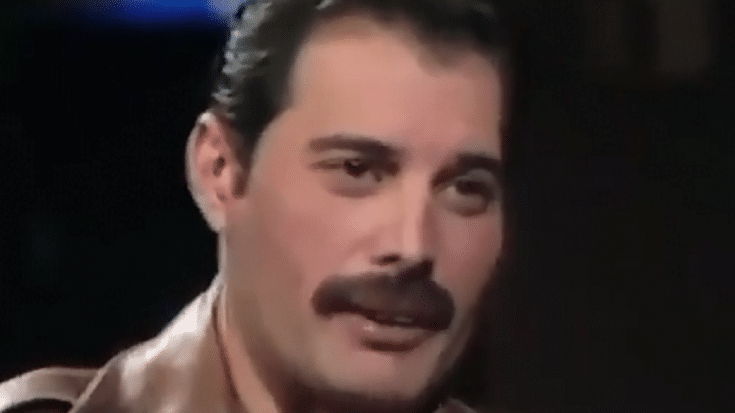 Freddie Mercury, with his fun and flamboyant persona on stage, always struck us as brutally honest. He never shied away from giving savage and witty answers and with this MTV interview, he showed just why we love him – he was not pretentious in any way. What you see is what you get. And that little mischievous smile said it all.

Queen is one of the few bands with a consistent lineup – there were no changes while Freddie was still alive and fronting them. And their chemistry is downright impressive especially when it came to live performances. It’s always tight, solid, and cohesive. And so the host just had to ask what kept the band together for many years even despite the tensions and problems between the members.

And Freddie’s answer was probably not what he expected.

Freddie also added, “You know, we want to make our music and just because you’ve made lots of money and you’re successful doesn’t mean, you know, that’s enough. It’s – this is the hardest time for us. This is a big test. I mean, we’ve been in the business 12 years, and our records still sell, and to keep it going that much further is hard.”

💥Freddie's Honest & Witty Answers: "Money"💥 . Interviewer: What do you think has kept the band together...for so many years? . Freddie: Money! 👉(I love how Fred already knows what his answer's gonna be before the interviewer has even finished his question 😁 That naughty look in his eyes and mischievous smile on his face as he looks and nods at the man with a cup in his hands all cool and collected like a BOSS 😎 Like he's hearing an old joke for the 100th time and he's just waiting to add his punchline 👊 And his side smile...too damn gorgeous to handle 🔥❤🔥 . Intwr: That doesn't seem to be the motivating force for many other bands. (👉Oh you fool!) . Fred: Oh we love the money. If they say that they don't like the money they're talking out of their ass. 😎 👉(Damn right! It's so satisfying to hear such honest truthful answers & see Freddie put the man in his place. And the way he says "ass" with that attitude...so sassy I wanna die 🔥😩🔥 . F: To be honest I'm sure Brian would say "in the end we want to be respected as musicians.". 👉(I love how he subtly points to the self-righteous, respectable & cliched "talk" common among musicians such as his own babdmate when he knows it's business for them more than anything. Oh Freddie if only you knew how time and money would unmask those "respected musicians"...but it seems like you already knew 😉 . F: I don't want to change people's lives by the music. I just want people, after I finished, to say "Queen were a band that came out with good music and people enjoyed their music and had fun." 👉(Words of wisdom...and you and your music still make us happy all the time. And darling you really DID change our lives more than you realize.👏❤) . F: And I certainly don't wanna give up now. I have nothing else to do. 😁 👉(He might as well add "I'm not a very good housewife" 😂 I love him and the face he makes) . 👉P.S. I wish I could see the intrvr's face during all this...expecting to have a routine interview receiving the same old formulaic answers everyone gives him but Freddie Mercury is no ordinary man and he plays by nobody's rules except his own 😏❤👑 . 🎥 @MTVnews 1984 . #FreddieMercury #honesty