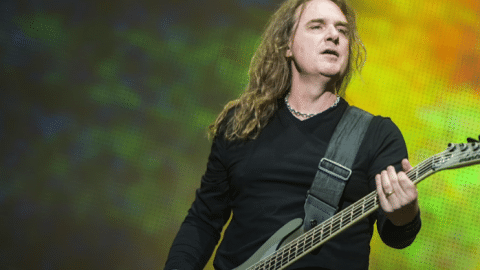 He Met With The Police

Former Megadeth bassist David Ellefson has broken his silence after he was dismissed from the band earlier this week. It all began with sexually explicit videos and screenshots of flirtatious exchanges that leaked online and made rounds on Twitter. Then came the allegations that he was grooming an underage girl.

Ellefson immediately denied those and a woman even came forward claiming she was the said female in the videos and messages. She then went on to set the record straight that she was of age when all of that happened.

In a new statement to Rolling Stone, Ellefson spoke for the first time following his dismissal.

“Recently, a very private video was illegally posted on the internet and false allegations were made against me. The actions in the video were between two consenting adults and were recorded without my knowledge,” he wrote. “I am working with Scottsdale Police Department in their investigation into charges regarding revenge pornography to be filed against the person who posted this video.”

“My lawyers are preparing a defamation lawsuit to be filed against this person. This person will be prosecuted to the fullest extent of the law,” he continued. “I am taking this time to be with my family. I wish my bandmates the best with their upcoming tour.”

The tour he mentioned will kick off on August 20 in Austin. Megadeth hasn’t announced Ellefson’s replacement yet.