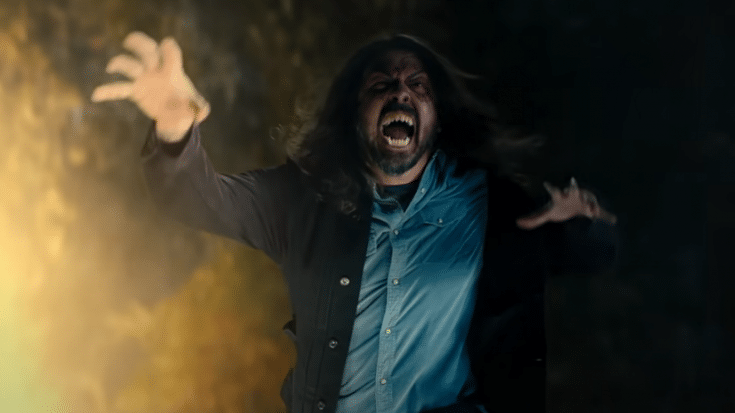 Warning!: Spoilers ahead. Read at your own risk.

On February 18, Foo Fighters have released a new red-band trailer for their upcoming horror-comedy Studio 666.

The new trailer didn’t show much added information from the first one, but it reveals how gore the film would be. Some of the scenes include demons tearing out Dave Grohl‘s intestines during a dream, people getting their faces and body cut in half by a chainsaw while having sex, and drummer Taylor Hawkins gets his face sliced in half with his own cymbal and much more.

In an interview with The Howard Stern Show, Grohl recently explained the plot of Studio 666:

“The premise of the movie is that we move into this house, I have writer’s block, I’m totally uninspired, I can’t come up with anything, and I wind up finding this creepy basement. And I go into the basement, I find this tape by a band from 25 years ago that recorded there. And there’s this song that, if recorded and completed, the fucking demon in the house is unleashed, and then, whatever, all hell breaks loose.”

Grohl is also planning on releasing an entire metal album for the fictional band from the movie, Dream Widow. According to an interview Grohl did with Rolling Stone, the record is the band’s lost album. He has already released one track from the band titled “March of the Insane.”

“The Foo Fighter’s are at a point in their career where they can do anything, and no one will question it”

“As a fan of campy horror movies, I really want to see this. It’s literally the roll Dave Grohl was born to play!”

Watch the new red-band trailer below.