Flashback: Waylon Jennings Reveals The 6 Words That Haunted Him For Decades After Buddy Holly’s Death 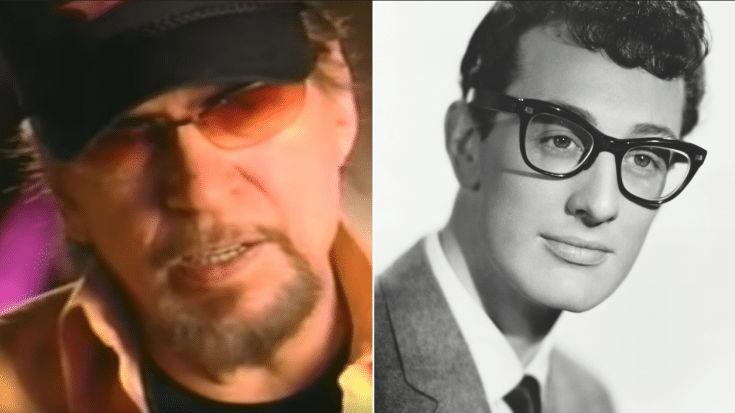 Country Legend Reflects On ‘The Day the Music Died’

This month marks the 60th anniversary of the plane crash that killed teen idols Buddy Holly, Ritchie Valens, and JP “The Big Bopper” Richardson. As the years tick by, the number of men who were there that fateful night is dwindling as they take their memories to the grave, but there’s one legend whose powerful testimony still hits like a freight train nearly two decades after his own passing.

Country legend Waylon Jennings, who passed away in 2002 at the age of 64, was interviewed as part of the February 3, 1999 episode of VH1’s Behind the Music. A member of Buddy Holly’s band and a friend to the late musician, Jennings offered up a powerful testimony of his final hours with Holly, the seemingly innocent life or death decision he made to give up his seat on the plane to a sick friend, and the final words to Buddy Holly that would haunt him for decades.

So cold, in fact, that the rickety, unheated tour bus carrying Holly and his bandmates Carl Bunch, Tommy Allsup and Jennings broke down on the way to the Surf Ballroom in Clear Lake, Iowa, resulting in frostbitten toes and a hospital stay for Bunch. Determined to find another, more comfortable, mode of transportation for himself and his band, Holly chartered a four-seat Beechcraft Bonanza with the intention of simply flying into Moorhead, Minnesota for the next date on the Winter Dance Party Tour.

Following that night’s show at the Surf Ballroom, guitarist Tommy Allsup lost a coin toss with 17-year-old Ritchie Valens for one of the three seats on the plane. Waylon, approached by JP Richardson who was suffering from the flu and asked if could take his spot on the plane, voluntarily gave up his own seat on the Beechcraft Bonanza – a decision that would ultimately haunt the future country legend for decades.

Those were the last words the two friends would ever share. Not long after takeoff, the Beechcraft Bonanza carrying Buddy Holly, Ritchie Valens, and The Big Bopper crashed into a field in Clear Lake, Iowa, killing all three stars as well as their pilot, Roger Peterson.

Jennings told Behind the Music, “God Almighty, for years I thought I caused it.” Haunted by the ordeal, he also revealed that the aftermath of the crash and his parting words to his old friend left him at a loss – how do you move forward after such a monumental personal tragedy that was 100%, unequivocally not your fault?

“I was just trying to figure out what to do with myself, you know? I was a completely changed person. I quit for a while – I wouldn’t even play a guitar, I wouldn’t pick it up.”

Jennings relocated to Arizona where he was able to put some of his painful memories of that fateful night behind him, forging ahead with a new band – Waylon and The Waylors, a venture that marked the beginning of what ultimately resulted in a glowing career built entirely on his own terms, and a lasting legacy as one of the most fiercely respected names in country music history.

Wherever Buddy is, we’re sure he greeted his old friend Waylon with a hug and a clap on the back, ready to hit the stage together for the first time in much, much too long.