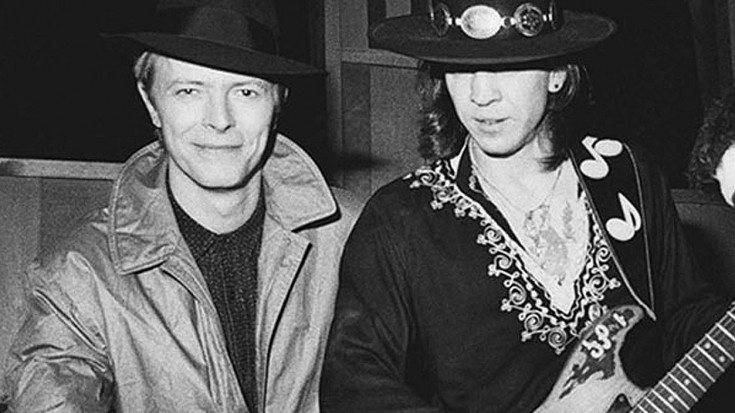 The Pair Joined Forces After A Chance Meeting At Montreux

The same year that Stevie Ray Vaughan struck gold with the 12-bar blues shuffle “Pride And Joy” was the same year the world was introduced to the next great guitar legend in the form of David Bowie’s “Let’s Dance”. An unlikely pair, sure – Stevie had roots in the Texas blues circuit and Bowie was the king of all things glam rock in the 1970s, reinventing himself with every album cycle but it was at the 1982 Montreux Jazz Festival that their worlds collided when Stevie’s playing impressed Bowie on a level not seen since Jeff Beck’s days with The Tridents.

A blues infused dance piece that featured Vaughan’s talents in the form of an Albert Collins inspired solo towards the outro, “Let’s Dance” proved to be a win/win situation for both Bowie and Stevie. The song went on to become one of Bowie’s biggest selling tracks and as a result, fans were wondering – who was playing that guitar at the end of the song and why hadn’t they heard of him before?

Fun Fact: Stevie didn’t actually listen to Bowie’s albums until it was time to head into the studio to record Bowie’s album, Let’s Dance.

Though Stevie’s stint with Bowie would be short-lived following the release of Let’s Dance and its eponymous single due to a “contractual disagreement” with regards to his spot on Bowie’s Serious Moonlight Tour, it didn’t matter: he struck out on his own to promote Texas Flood and became a household name shortly after. While we’re glad Stevie was catapulted into the spotlight and into legend with Texas Flood, we’re also infinitely glad that the world got their first taste of his brand of the blues through his chance meeting with David Bowie.