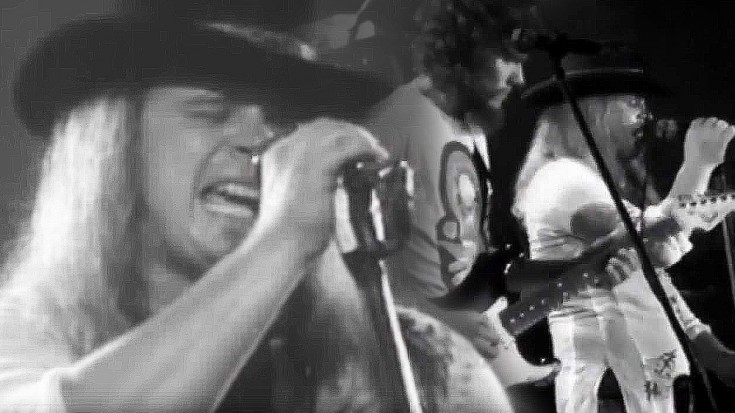 Nothing says Lynyrd Skynyrd quite like the song that started it all, the thunderous ‘Gimme Three Steps’. No matter where you hear it – on the radio, on studio recordings, or our personal favorite, live and up close – ‘Gimme Three Steps’ is a guaranteed good time that’ll always get you moving! In 1977, fans of Lynyrd Skynyrd in New Jersey got their chance to get moving to this American classic when the band played Asbury Park’s Convention Hall and lucky for us, Lynyrd Skynyrd and their electrifying performance were immortalized in rare black and white footage – a real treat for those of us who didn’t get to see the band riding the success of their famed Street Survivors Tour.

To say that the boys had a great performance is an understatement – they absolutely blew the doors off with ‘Gimme Three Steps’!

Fun Fact: ‘Gimme Three Steps’ was inspired by real life events; there really was a girl named Linda Lou, and Ronnie did dance with her – narrowly avoiding serious injury or at the very least, an unpleasant night in the hospital.

Lynyrd Skynyrd is a band that always has a great time when onstage, and this night was no different; whether it was Ronnie padding around the stage barefoot and not even trying to hide the pride he had in his bandmates, or guitarists Allen Collins, Steve Gaines and Gary Rossington lining up at the foot of the stage to tear through a particularly energetic passage of the song together, ‘Gimme Three Steps’ is nothing short of a non-stop good time had by everyone!

I was cutting the rug
Down at a place called The Jug
With a girl named Linda Lu
When in walked a man
With a gun in his hand
And he was looking for you know who.
He said, “Hey there fellow,
With the hair colored yellow,
Watcha tryin’ to prove?
‘Cause that’s my woman there
And I’m a man who cares
And this might be all for you.”

I was scared and fearing for my life.
I was shakin’ like a leaf on a tree.
‘Cause he was lean, mean,
Big and bad, Lord,
Pointin’ that gun at me.
I said, “Wait a minute, mister,
I didn’t even kiss her.
Don’t want no trouble with you.
And I know you don’t owe me
But I wish you’d let me
Ask one favor from you.”

Well the crowd cleared away
And I began to pray
As the water fell on the floor.
And I’m telling you son,
Well, it ain’t no fun
Staring straight down a forty-four.
Well he turned and screamed at Linda Lu
And that’s the break I was looking for.
And you could hear me screaming a mile away
As I was headed out towards the door.