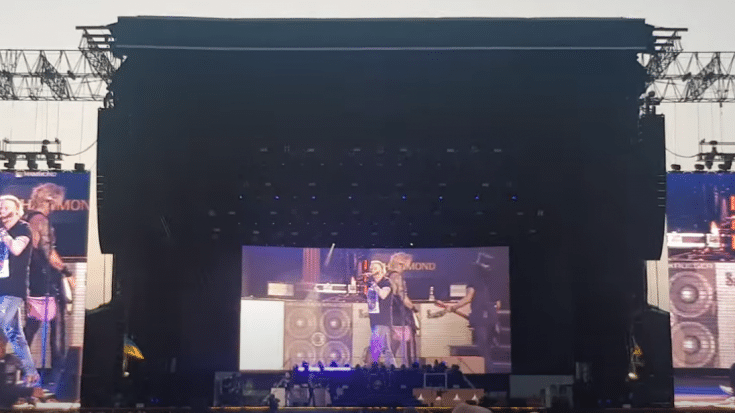 For the first time in 10 years, Guns N’ Roses performed their Chinese Democracy classic “Street of Dreams” during a show on Saturday, June 18 in Prague, Czech Republic. The set marks as the first time Slash and Duff McKagan have played the song alongside Axl Rose.

The band kicked off their European tour on June 4 at Passeio Marítimo de Alges, Oeiras in Portugal and they have been surprising the crowd with songs on their set list. On their first stop, they played “Reckless Life” for the first time since 1993 and “You’re Crazy” for the first time since 1991. They have also added some AC/DC’s classic such as “Walk All Over You” and “Back In Black.”

Earlier this year, Slash told Classic Rock of the reunion he had with Rose:

“Axl and I really got over this major sort of hump of negativity that we’ve been carrying around for years and years. It was a real simple, relatively short conversation that we had.

“In all these years that we’ve been apart, he’s become super-fucking professional. And he’s never missed a beat during this whole time. So it’s been great. There has been a sort of synergy that’s been happening this last six years that we never had in our first incarnation.”

He also added that there would be more new music coming from them:

“There’s new Guns material coming out as we speak, and we’ll probably keep putting it out until the entire record’s worth of stuff is done and then put it out solid.

“It’s cool. I’m enjoying working on the stuff and having a good time doing it.”

Watch a fan-filmed footage of the performance below.