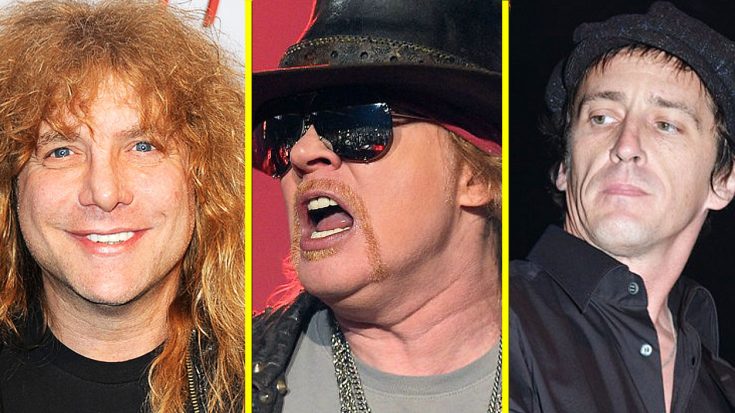 Looks Like Someone Is NOT Happy About This Reunion!

Last year saw the official return of the legendary rock band Guns N’ Roses, sorta. Only three original members were a part of the Not In This Lifetime Tour of 2016. Those members being lead singer Axl Rose, lead guitarist Slash, and bassist Duff Mckagan. Though only 3 out of the 5 original members were a part of the tour, fans still saw it as a full-fledged reunion. Whether or not you saw it as a full reunion of the original band, you can’t deny that it was an epic tour filled with great concerts.

At a select few of the shows, you might’ve seen the original drummer Steven Adler join then on stage for a song or two. Audiences in every city that he played were thrilled to see the rock legend back behind a drum set and playing with the band again. Unfortunately, he would only play with them for a few songs and a few cities. Nevertheless, Steven Adler has been chomping at the bit to try and find his way back in the band and hopes to bring ex rhythm guitarist Izzy Stradlin along with him.

Here is some of what he had to say: “I had a great time last year doing the couple shows that I got to do with them, but it was not everything that I thought it was going to be. It was the complete opposite.”

Adler is asked if he’d ever consider joining the band again: “If it was going be just the five original guys with Izzy and Axl, Slash, and Duff and myself, then yes I will, but otherwise, it’s not the magic and it’s not fair to the fans. Me and Izzy actually really do wanna be a part of it.”

This is obviously a tricky situation. On one hand, GNR have been rather hesitant about letting Steven Adler back into the band, but on the other, they been slowly letting him get his feet wet again and are becoming one with the idea that he (and possibly Izzy) could see themselves bank in the band.

What do you make of this whole situation? Do you want to see Adler and Stradlin back in the band? Let us know what you think in the comments!