Everyone Else Can Go Home, Because ‘Fear And Loathing In Las Vegas’ Had The Greatest Soundtrack Ever 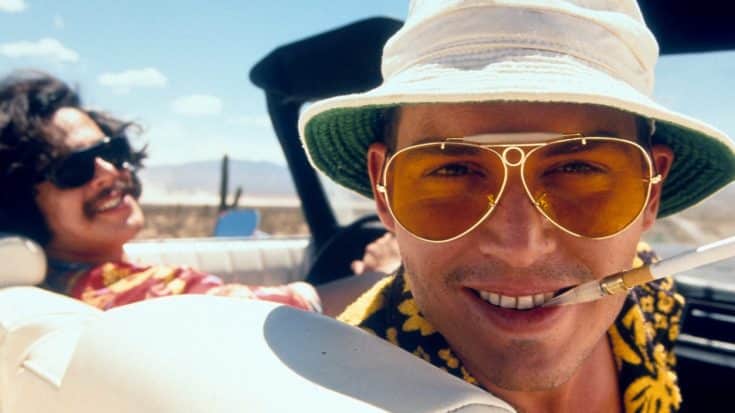 Too Weird To Live, Too Rare To Die

One of the things Hunter S. Thompson knew better than anyone else was that with the right music, anything is possible. He called it “a matter of energy”; “a question of fuel,” and until the day he died was of the firm belief “that a car with the gas needle on empty can run about fifty more miles if you have the right music very loud on the radio.”

It goes without saying, then, that on what would have been Hunter’s 81st birthday it’s only fitting to look back on what happened when music and madness intersected in one director’s quest to bring one of the most insane tales of 70s drug fueled debauchery and depravity to the big screen.

Too weird to live, and too rare to die. pic.twitter.com/qQsVYXloGB

Released in 1998 and starring Johnny Depp and Benicio Del Toro as Raoul Duke and his lawyer Dr. Gonzo, Fear and Loathing in Las Vegas is a sordid and hilarious tale of the pair’s drug induced romp through 1971 Las Vegas. Director Terry Gilliam made good on his intention to make the entirety of the film feel like one big drug trip from beginning to end, scoring a $600,000 budget to give Hunter S. Thompson’s story the soundtrack it needed and, quite frankly, deserved.

From the opening scene featuring Big Brother and the Holding Company’s “Combination of the Two” to Dr. Gonzo’s hilarious (and poorly executed) attempt at death by 8-track player to Jefferson Airplane’s “White Rabbit,” Fear and Loathing does a stellar job of capturing the spirit of the era. It blends psychedelia with Thompson’s crippling disappointment with the 60s counterculture movement, while acting as the “fuel” that pushes Raoul Duke and Dr. Gonzo through a weekend so wild it would be unbelievable if it happened to anyone else.

Through the chaos, though, there’s a moment of quiet reflection. In a scene titled “The High Water Mark,” Raoul Duke is seen at his typewriter, ruminating on the failure of the counterculture movement as The Youngbloods’ “Get Together” plays softly in the background. Somehow, it fits the scene in a way that no other song could; scenes from the 60s flash across the screen as Raoul looks back on the magic that was being in San Francisco during the 1960s, wondering how something so beautiful and so powerful could just…fall apart.