Eric Clapton, Paul McCartney and Ringo Starr Perform “Something” – It Might Be The Best We’ve Ever Heard 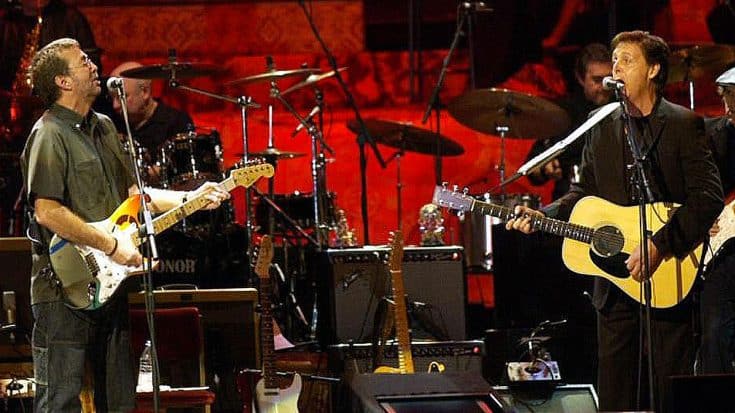 George Harrison’s November 29, 2001 death left the music industry he both loved and hated reeling, trying desperately to adjust to a world without one of the most influential musicians of the 20th century. Struggling with a solution to the question of how exactly one properly celebrates a life as well lived and well loved as George’s, friends and family came together with 2002’s Concert For George, a star studded affair that saw George’s friends and colleagues from every corner of the music industry turn out for a night of music and fun performances in his honor; from ELO’s Jeff Lynne to Eric Clapton and former Beatle bandmates Paul McCartney and Ringo Starr, the Concert For George was the loving sendoff George would have wanted – no tears, just laughter and music from the people he loved most in the world.

“Sometimes if you’d go ‘round to George’s house, after you’d have dinner, the ukuleles would come out,” McCartney said as he introduced “Something” that night.

“And one time not so long ago, we were playing and I said, ‘There’s a song I do on the ukulele.’ I played it for him—I’ll play it for you now. It’s a tribute to our beautiful friend.”

One of the highlights of the evening came as Paul McCartney took the stage, armed with only a tiny ukulele as he fondly recalled all of the times he would bring out the uke at George’s house after dinner before launching into a stripped down take on “Something”. Then, as the musicians on the stage began to join in one by one, the Abbey Road classic turned into something soaring and beautiful and full as Paul shared vocal duties with Eric Clapton for a performance of “Something” that just might be the best we’ve heard yet.

When a legend like George Harrison dies, it’s a tremendous struggle to figure out how to best pay tribute to them in a way that both sums up their accomplishments and includes everyone they’ve ever loved – but in this case, it’s pretty safe to say that this all-star jam was the perfect way to sum up a career well experienced, a life well lived, and a man well loved.