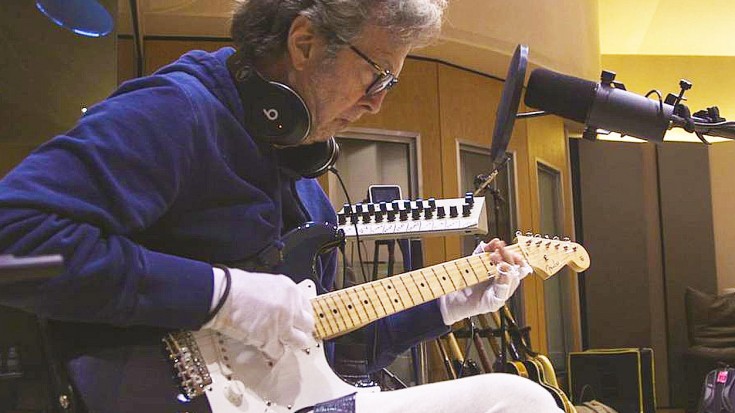 The great thing about being a fan of Eric Clapton is that every few years, the 71 year old guitarist always finds a way to circle back to his early days, which is exactly what happened in the case of his latest single “Can’t Let You Do It”. Featured on Clapton’s soon to be released 23rd album I Still Do, “Can’t Let You Do It” is a funky, upbeat tune no doubt influenced by the late JJ Cale with its walking bass line highlighted by an accordion and slide guitar in the background.

In fact, if it sounds like something he’d have released 4 decades ago, you’re not far off the mark – “Can’t Let You Do It” sees Clapton reuniting with producer Glyn Johns – the man partly responsible for some of Clapton’s biggest hits in the 70s.

Fun Fact: Clapton is the only artist who’s been inducted in the Rock and Roll Hall of Fame three times.

Accompanied by a lyric video that features a young woman painting a gigantic picture with the song’s lyrics, “Can’t Let You Do It” has got to be far and away one of our favorite Clapton creations in recent years. Be sure to check it out in the footage below and while you’re at it, don’t forget to pick up a copy of I Still Do when it’s released next week; a little birdy told us that one of the tracks on the album features a cameo from George Harrison!