41 Years Ago: Elvis Presley Dies At 42, And Rock And Roll Loses More Than Just Its King 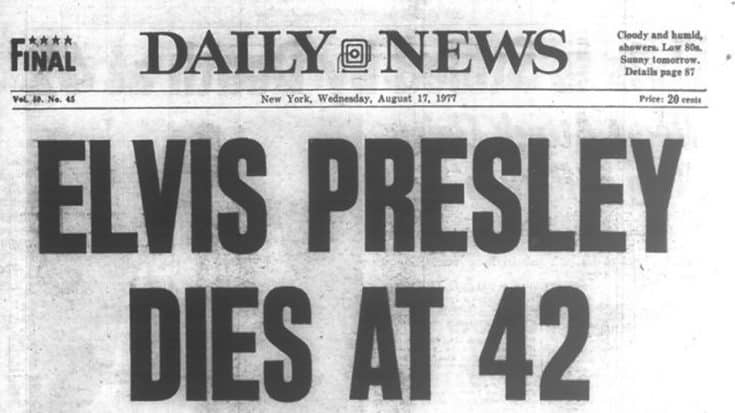 Before everything and after, there was Elvis.

Only heaven could have known that the shy boy born to Vernon and Gladys Presley in a Tupelo, Mississippi shotgun house would grow up to be royalty, his reign as the the king of all things rock and roll changing not just the world he was born into but the world that would remain long after he took his final bow.

Elvis Presley’s August 16, 1977 death at the age of 42 brought with it a special form of grief we’d only experienced one time before, with the plane crash that claimed the lives of Buddy Holly, Ritchie Valens, and the Big Bopper; where their deaths represented the end of our collective innocence and helped usher in an era devoid of rose colored glasses, Elvis’ death represented the end of all that we’d ever known – our link to rock and roll’s roots, its past and present and everything thereafter, was gone like a thief in the night.

Elvis spent the last morning of his life taking care of last minute tour details and spending time with family and staff. He was slated to begin another tour, with plans to fly out to Portland, Maine that evening for a show the following night before continuing on to New York later that week, eventually turning in at around 7am on the morning of August 16th to rest. Unable to sleep, he informed his fiancee Ginger Alden that he was going to the bathroom to read; Alden awoke several hours later and realizing that he wasn’t in bed with her, knocked on the bathroom door before opening it and discovering an unresponsive Elvis on the floor.

Despite aggressive attempts to revive him, Elvis Presley was declared dead at 3:30 p.m. at Baptist Memorial Hospital, the result of a fatal heart attack.

41 years on, it’s impossible to imagine rock music’s evolution without Elvis’ influence and frankly, we don’t really want to try. There isn’t a rock figure alive who has captivated the world on the level that he did during the course of a 23 year career that spawned over 600 million records sold, countless records smashed, and generations of rock fans and musicians. A heady brew of rock, country, and a whole lot of soul, Elvis set the bar impossibly high for singers to follow and while many have tried to meet or exceed that bar, all have paled in comparison.