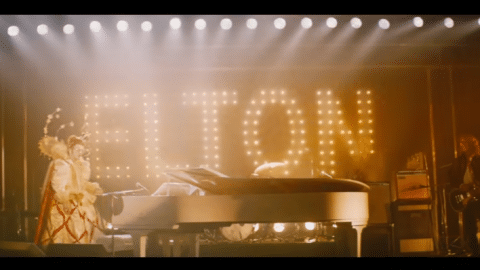 After bringing home a Golden Globe Award for “I’m Gonna Love Me Again”, the same track has been nominated for Best Original Song in the 92nd Academy Awards. Elton John wrote it with longtime collaborator Bernie Taupin and he sang it with actor Taron Egerton. Speaking about Rocketman, John said: “I wanted his interpretation of me, through Bernie’s lyrics [and] my music — not just acting. I left Taron in the hands of [producer] Giles Martin, who I trusted implicitly because he’s brilliant. I didn’t want to be in Taron’s shadows, watching over the process, I trusted them to do what they needed to do, artistically, and listening back I’ve been astonished with the results.”

John and Taupin will be up against Randy Newman for “I Can’t Let You Throw Yourself Away” from Toy Story 4, Dianne Warren for “I’m Standing With You” from Breakthrough, Kristen Anderson-Lopez and Robert Lopez for “Into The Unknown” from Frozen II, and Joshuah Brian Campbell and Cynthia Erivo for “Stand Up” from Harriet. Thom Yorke and Beyoncé were on the shortlist but didn’t make the cut.

Elton John’s first Academy Award was in 1995 with The Lion King’s “Can You Feel the Love Tonight.” Interestingly, although Taron Egerton picked up the Golden Globes award for Best Performance By An Actor in A Motion Picture — Musical or Comedy, the Best Original Song nomination is the only one they got for the Oscars.