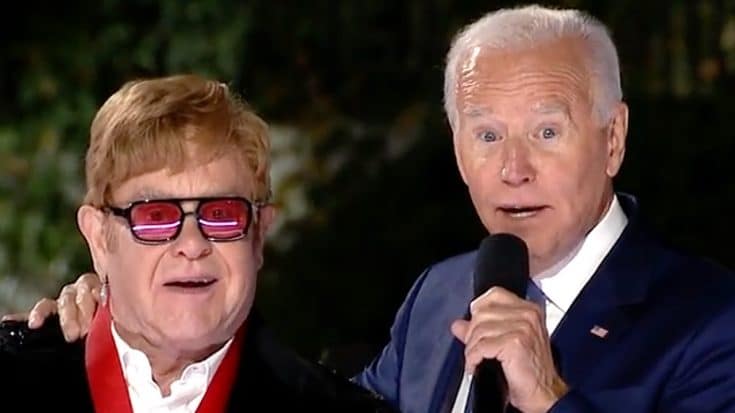 An unexpected honor for Elton John was presented to him personally by US President Joe Biden on September 23.

The iconic singer was not aware that he is about to receive a National Humanities Medal for his work on the AIDS epidemic in the ‘90s. The award was given to him after he performed outside the White House. President Biden told the audience at the A Night When Hope and History Rhyme show, organized by the A+E Networks and The History Channel:

“Tonight is my great honor, and I mean this sincerely, to present the National Humanities Medal to Sir Elton John.”

The singer was surprised and began to cry. The citation read:

“The President of the United States awards this National Humanities Medal to Sir Elton John for moving our souls with his powerful voice, and one of the defining songbooks of all time. An enduring icon and advocate with absolute courage, who found purpose to challenge convention, shatter stigma and advance a simple truth: that everyone deserves to be treated with dignity and respect.”

“I think we surprised him!” laughingly said the President after he laid the medal round John’s neck and then exchanged hugs with each other. John said:

“We would have never gotten as far without President Bush. Please tell him for me, give him a big hug. I just wish America could be more bipartisan on everything.”

The award given to John was only awarded to those whose work “deepens the nation’s understanding of the humanities, broadened our citizens’ engagement with the humanities, or helped preserve and expand Americans’ access to important resources in the humanities.”