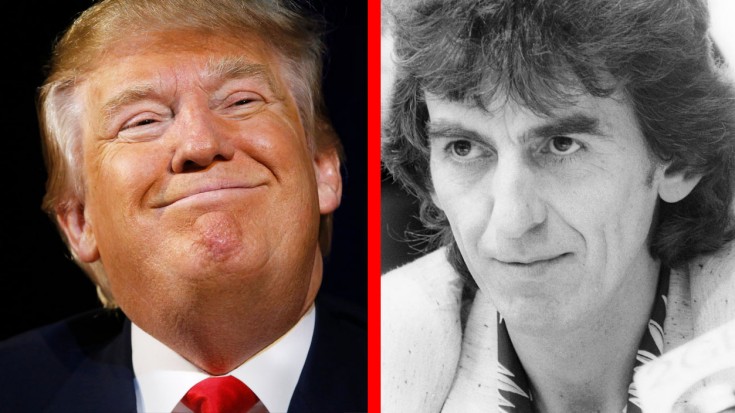 Estate Called Use Of The Song ‘Offensive’

Earlier this week saw British rock legends Queen take GOP candidate Donald Trump to task after entering the Republican National Convention to “We Are The Champions,” deliberately ignoring requests to cease using the 1977 anthem and failing to secure authorized use of the song from both Queen and their publishing company Sony/ATV Music Publishing. As of this morning, the Trump campaign came under fire again – this time from the estate of late Beatle George Harrison for the unauthorized use of “Here Comes The Sun” that accompanied the entrance of Trump’s daughter Ivanka as she prepared to introduce her father.

Representatives for the estate of Harrison, who died in 2001 after a lengthy battle with lung cancer, took to Twitter to voice their anger and frustration with a move they called “offensive” in a series of scathing tweets, even going so far as to acidly offer a more fitting alternative to the Trump campaign’s use of “Here Comes The Sun”:

The unauthorized use of #HereComestheSun at the #RNCinCLE is offensive & against the wishes of the George Harrison estate.

If it had been Beware of Darkness, then we MAY have approved it! #TrumpYourself — George Harrison (@GeorgeHarrison) July 22, 2016

This isn’t the first time Donald Trump has aroused the ire of bands and musicians for the use of their music in his bid for the presidency, and something tells us it won’t be the last; more importantly, the issue of repeatedly using music after being asked and ultimately told not to raises the question as to whether political figures have the right to essentially disregard the wishes of the artists whose songs are being used – sometimes illegally, as in the case of Queen earlier this week – for their campaigns and if not, what legal recourse do artists have in situations like this?

No word from Trump’s camp yet regarding their use of “Here Comes The Sun” but if the last year is anything to go by, their response is sure to be entertaining!