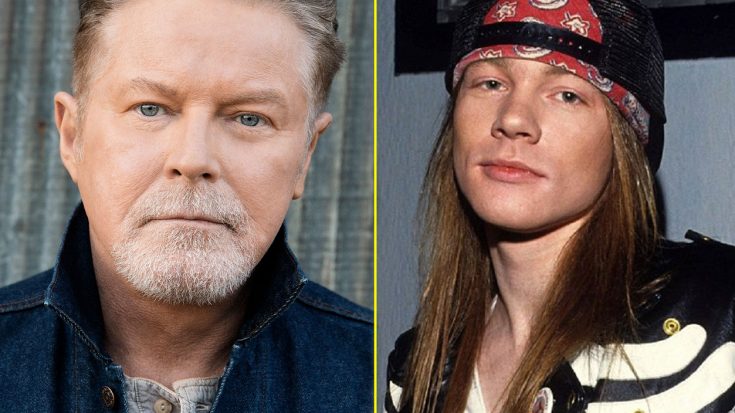 It’s every band’s worst nightmare: you’ve got a huge show coming up and just before the big day arrives, a crucial member of the band – your drummer – is nowhere to be found. Guns N’ Roses know this feeling intimately after former drummer Steven Adler’s heroin addiction sent him to rehab in the late eighties, leaving the band without a drummer and facing a career defining performance of “Patience” at the American Music Awards.

Panicked as he watched the calendar days wind down and the clock tick closer to the AMAs, Axl Rose called upon labelmate and former Eagle Don Henley for help; the pair knew each other as Axl contributed background vocals to “I Will Not Go Quietly,” a track on Henley’s The End of the Innocence and with a little encouragement from producer Danny Kortchmar, Henley agreed to fill in for Adler at the American Music Awards.

Thankfully, the entire affair went off without a hitch as you can see in the video below. Don looked every bit the part, sporting long hair and sunglasses from his spot behind the kit and Guns N’ Roses’ performance of “Patience” went down as one of the band’s most iconic live performances, living up to the impossibly high expectations set by both the band and the producers that selected them.

Of the experience, Don looks back fondly and says, “Fortunately it was a ballad that we played, not a balls-to-the-wall number,” added Henley. “It was a piece of cake. There was really nothing to it. … I think they were kind of rebelling about the whole thing. I understood that very well, because I lived through one of those periods. So, in a way, I was reliving my past. Hell, I hadn’t seen Dick Clark since 1970.”