Disturbed Covers Simon & Garfunkel’s ‘The Sound of Silence’ on Conan 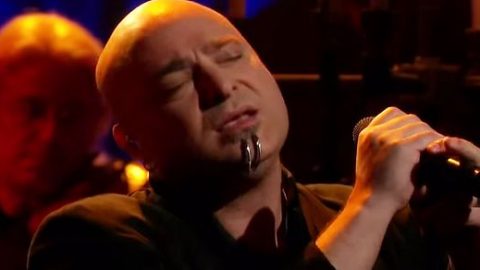 Rock band Disturbed appeared on Conan O’Brien’s TBS late night show with an orchestra and performed an EPIC cover of “The Sound of Silence” originally by Simon and Garfunkel. The band’s cover of “The Sound of Silence” made it to the Billboard Hot 100 chart at No. 69. The track is part of their sixth studio album “Immortalized” which debuted at No. 1 on the Billboard 200 chart.

Disturbed’s well-executed version of this rock ballad has got to be one of the best song remakes there is. It’s so incredible that it caught the attention of the original writer and performer of the hit, and one half of Simon and Garfunkel, Paul Simon. He was so impressed by Disturbed’s rendition that he shared the track on his official Facebook page. Simon also reached out to lead singer David Draiman which resulted to an email exchange.

In case you missed it, Disturbed did a wonderful rendition of "The Sound of Silence" on Conan this week. The S&G cover…

“Mr. Simon, I am honored beyond words. We only hoped to pay homage and honor to the brilliance of one of the greatest songwriters of all time. Your compliment means the world to me/ us and we are eternally grateful.”

Watch their performance below: