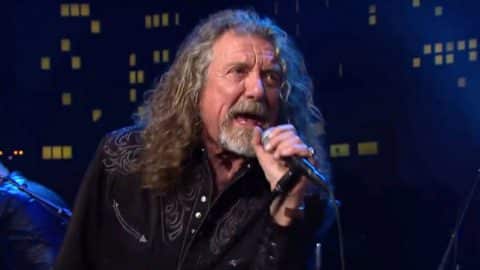 Led Zeppelin front man Robert Plant appeared on the highly acclaimed long-running music program “Austin City Limits” on PBS and performed some Led Zeppelin classics and re-imagined hits. The TV program featured an entire TV concert by Robert Plant and the band Sensational Space Shifters, with whom he recorded the song “The Ceaseless Roar” in 2014. Plant, who resides in Austin last appeared on the TV program in 2003 during its 28th season. The show’s 42nd season was kicked off with a concert by Paul Simon. Plant and The Sensational Space Shifters performed 8 songs with including Led Zeppelin classics such as “Black Dog”, “Babe, I’m Gonna Leave You”, “The Lemon Song” and a mash up of “I Just Want To Make Love To You” and “Whole Lotta Love”. From “Lullaby” they performed “Rainbow”, “Turn It Up”, and “Little Maggie”. A bonus song, “In The Mood” from the 1983 album “The Principle of Moments” was also played.

Watch their performances of “Black Dog” and “I Just Want To Make Love To You/Whole Lotta Love” below: