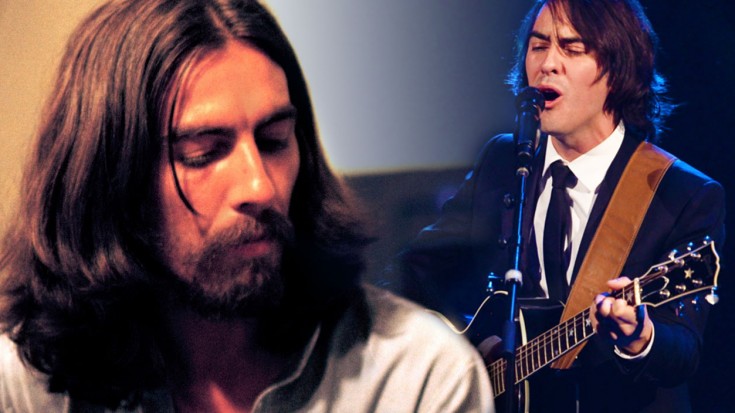 The world suffered an immeasurable loss when we lost George Harrison of The Beatles in 2001 after a lengthy battle with lung cancer. The quiet Beatle whose talent shone brightly during his solo career left behind a massive legacy not only in the form of music, but also in his son, Dhani Harrison. You may remember seeing Dhani perform during his father’s 2004 induction into The Rock And Roll Hall Of Fame, but these days, he’s branched out and made a name for himself as an accomplished singer, songwriter, and world class guitarist!

Not only is Dhani fiercely talented in his own right, he is the spitting image of George! From his mannerisms onstage to his quiet, gentle personality, Dhani takes after his father in nearly every way. So when he appeared on Late Night With Conan O’Brien to perform his father’s iconic ‘Let It Down’ in his honor, the world was given a chance to see Dhani continue George’s legacy – and do it well!

This performance is one you will not want to miss! We may see a lot of George in Dhani, but it’s clear that he’s well on his way to achieving his own greatness!

Though you sit in another chair, I can feel you here
Looking like I don’t care, but I do, I do
Hiding it all behind anything I see
Should someone be looking at me

While I occupy my mind, I can feel you here
Love to us is so well timed, and I do, I do
Wasting away these moments so heavenly
Should someone be looking at me

While you look so sweetly and divine, I can feel you here
I see your eyes are busy kissing mine, and I do, I do
Wondering what it is they’re expecting to see
Should someone be looking at me